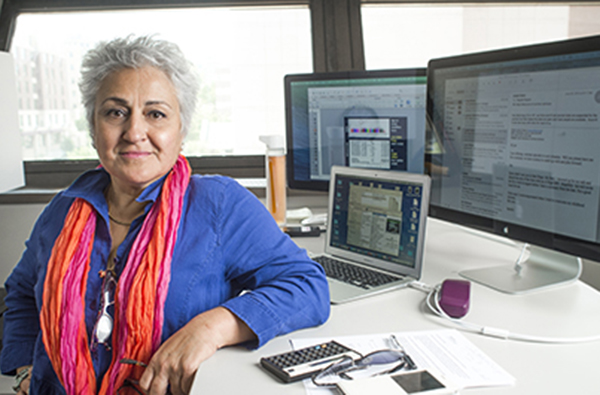 Recently, an international study by the MiBioGen consortium, an international collaboration involving more than 20 labs across the world, analyzed the common genetic factors that influence the composition of the human gut microbiome in more than 18,000 people. The results were published January 18 in Nature Genetics. Haydeh Payami, PhD, professor in the Department of Neurology at the University of Alabama at Birmingham, and Zachary Wallen, a postdoctoral fellow in the Payami laboratory, were collaborating authors on the study.

"The last decade has greatly expanded our understanding of the human microbiome, the trillions of microbes that inhabit the internal and external surfaces of our bodies," Payami said, whose research focuses on the gut microbiome as a potential missing link between genetic and environmental causes of Parkinson's disease. "We have come to appreciate vital role the microbiome plays in human development from infancy to adulthood and their active participation in many human functions: helping us to digest food, training our immune system and affecting our brain function via the gut-brain axis."

The largest and richest human microbiome inhabits the gut and contributes substantially to our health. Yet the factors that shape its composition, although widely studied, remain unclear, and the more than 80 percent difference in gut microbiome between individuals remains unexplained. In general, environmental factors such as diet and medication play a major role. However, a role for human genetic variants has also been suggested by the identification of heritable bacteria.

The MiBioGen consortium study concludes that at least two human genes have a major impact in shaping our gut ecosystem: the lactase gene LCT, which influences the abundance of lactose-digesting Bifidobacteria, and the fucosyl transferase gene FUT2, which determines the abundance of Ruminococcus torques. They also show that other human genes affecting microbiome composition are involved in important aspects of host metabolism, nutrition and immunity. The analyses stretch as far as establishing relationships between several bacterial species and human diseases.

"We could see that genetic variants in the lactase gene determine Bifidobacteria abundance in adults, but not in children, and that this effect is more pronounced in European populations," said Alex Kurilshikov, the first author of the study. "The large sample size also allowed us to apply genetic methods and show that some bacteria are causal for developing diseases."

The MiBioGen researchers have made their results available to other scientists and the scientific community for additional and future analyses. All results are uploaded to http://mibiogen.org, supported by the Genomics Coordination Center in the Department of Genetics, UMCG.

Bradford Health Services is expanding of its services in Alabama with the launch of the Bradford Clinic, a new program with outpatient centers that combine Bradford's counseling with Medication-Assisted Treatment (MAT).

Marie-Carmelle Elie, MD has been named chair of the Department of Emergency Medicine at the UAB School of Medicine

Forbes named Birmingham-based Kassouf & Co one of the top firms of 2021 in their annual America's Best Tax and Accounting firms list.

Heather Williams has the UCA Women's Center as a Board-Certified Adult-Gerontology and Women's Health Nurse Practitioner.

Recently, an international study by the MiBioGen consortium, an international collaboration involving more than 20 labs across the world, analyzed the common genetic factors that influence the composition of the human gut microbiome in more than 18,000 people.

UAB has opened a new urgent care orthopaedic clinic, which is run by the Department of Orthopaedic Surgery and located at UAB Highlands Hospital.

UAB Medicine Listed Among Most Wired Hospitals for 2020

In 2020, for the seventh consecutive year, UAB Medicine has been named one of HealthCare's Most Wired by the College of Healthcare Information Management Executives (CHIME).

Ariel Salas, MD, MSPH, assistant professor in the Department of Pediatrics at UAB, has been awarded a $777,384 grant