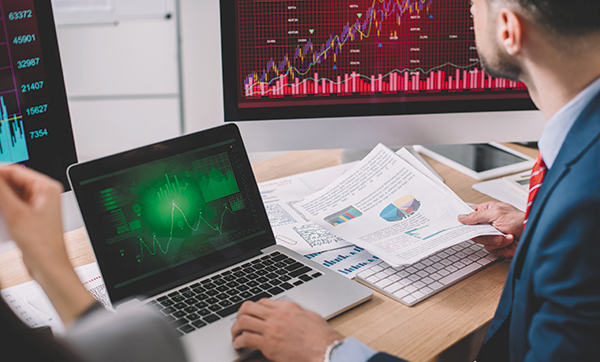 As President Joe Biden was taking the oath of office in Washington, D.C., healthcare financial analysts gathered via video to share their thoughts on what a new administration and ongoing pandemic might mean for various industry sectors in 2021.

The virtual event brought together three national analysts for a panel discussion to share insights into how healthcare fared in 2020 and where it's headed in 2021.

Mayo said the sheer velocity and volatility within the market was surprising in 2020 as he and colleagues went from analyzing "a lot of solvency risk" to a quick transition "towards excessive liquidity that was injected into the system." He added, "I think we saw a corresponding reevaluation to levels, across many asset classes, that I wouldn't have anticipated."

Mayo also marveled at recent IPO activity. "Maybe a final point in just stepping back and reflecting on 2020 was the material surge we saw in equity capital markets activity," he said while noting that 11 IPOs were filed in a two-week period in early January. "I feel like I've spent the better part of the last decade taking companies private, and so it's refreshing to see many of these organizations looking to become public."

Mayo has a positive bias over the next six to nine months around the provider market. "I think it's really underappreciated the sustainability of the cost structure today," he said, adding that environment has an exceedingly positive skew for certain providers. "Taking a stock like Tenet as an example, it's not inconceivable they could be generating over 30 percent of their market cap in real, discretionary, free cash in the next 12 to 24 - closer to 24 - months." Thinking about where stocks are currently trading, Mayo said, "There's a much more interesting risk/reward, I think, in the provider world."

When it comes to innovation and investment, Mayo looks at the topics through the lens of the venture capital market. "Where is a lot of the capital being allocated? And there is a lot in the payer solutions-oriented sector," he said of companies working to provide data analytics, population health intel and solutions for employers.

Hynes was most excited about how CROs (clinical research organization), hospitals and clinical labs navigated a tough 2020 and positioned themselves going forward.

"The CROs were very resilient during COVID," she said. "Obviously patients didn't have access to a lot of sites, but they were able to adjust to telehealth very quickly." Their participation in vaccine trials kept them busy in 2020, and Hynes thinks that carries forward into 2021. "This group trades on the IPO market, and it was such a hot market through the pandemic, and that incremental funding, especially in the biopharma industry, is going to propel revenue growth probably for the next two or three years."

Hynes was also impressed at how flexible and resilient hospitals proved to be. "When admissions went down as elective procedures stopped, hospitals adjusted their cost structures," she said. "And I there are positive headwinds on the political front in 2021 because Biden is in favor of expanding the ACA and expanded coverage helps hospitals. From an operational perspective, I think there is a lot of delayed care, which should also benefit hospitals."

Lastly, Hynes said clinical labs are one of the sectors she is most excited about. "They've been a huge part of the COVD solution with the testing," she said. "I think one of the things that has been underappreciated for both LabCorp and Quest is that they will probably generate an extra billion or more of free cash flow that they otherwise wouldn't have because of COVID testing, and they are getting elevated reimbursement right now. That extra infusion of cash gives both companies a lot of optionality from accelerating growth to M&A."

Taylor's work is mostly focused on health insurance and providers. He noted the title of the group's 2021 outlook for these sectors was 'Mixed & Complex.' However, he added with a laugh, "The feedback I got was 'When in the last 30 years has healthcare services not had a mixed and complex outlook?" - so touché."

"I think in the first half of the year, there is momentum behind providers, particularly hospitals," he said. "Acuity is high, the commercial mix is strong and there is deferred care that will be addressed. I think investors are going to chase that to some degree. In the back half, where the comps get tough, I'm not sure that trade continues to have legs."

Taylor thinks insurers have a huge amount of uncertainty in the face of historically difficult comps. "UnitedHealthcare put up good numbers in January and their stock was still trading lower," he said. "I think managed care has a really difficult first part of the year."

On the flip side, Taylor thinks the interest in 2021 is going to be on thematic growth companies oriented around value-based care like capitated medical groups and site of care options like home health and telehealth. "Interest in these concepts combined with interest rates near zero are big drivers in the market for investment," he said. "There are more IPOs in this sector than I've ever worked on in my career by a factor of five or six. All of them are telling investors that they can take down unnecessary hospitalizations and ER visits, and that they can move more patients to a lower cost site."

With a new administration in the White House and Democrats holding a slim majority in the House of Representatives and the narrowest possible majority in the Senate, what changes do analysts anticipate?

Ann Hynes: "I think what is clear about Biden is that he wants to strengthen and expand the ACA. That's a positive sentiment driver for healthcare, but especially for healthcare providers." She added that in her universe that focuses on the drug supply chain, she has to worry about drug pricing. While there might be some appetite to include legislation to control pricing, she doesn't think it is likely to happen with the current makeup of Congress.

Whit Mayo: "I don't think we know exactly the direction that Biden is going to take with his entire healthcare agenda, but if he governs any way remotely close to how he campaigns and debates, I think we can just call it 'slightly left of center,' so I'm anticipating a much more moderate type of approach to policy."

Gary Taylor: "The conventional wisdom is that there is not much he can get done with the Senate makeup the way it is. The only thing Biden has ever expressed support that, in our view, would be harmful to providers would have been the public option, which seems off the table. "There remains some conversation around lowering Medicare eligibility age but that comes with a Congressional Budget Office price tag of about $4 trillion. I think trillions eventually matter, so I'm kind of skeptical there."

Looking at Xavier Becerra, President Biden's pick for Health and Human Services, Taylor wondered what that might mean for provider consolidation moving forward. As California Attorney General, Becerra was instrumental in reaching a settlement to resolve antitrust allegations against Sutter Health. In January, the Federal Trade Commission announced the agency would look at provider consolidation in south Florida. "So already, there seems to be some signaling of a more adverse stance out of the FTC with respect to provider consolidation," Taylor said.