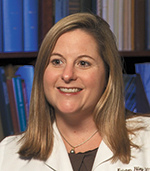 An epilepsy diagnosis will change a person's life. He loses his legal ability to drive, depriving him of independence. It will affect the type of work she is able to do, maybe end her career dreams, and even restrict the recreational activities she can enjoy. It can become difficult to plan his future since he is limited by a disease that can disrupt his neural functions at any time.

Fortunately, for patients whose seizures tend to begin in the same place, preferably in a location not too near critical areas of the brain, surgery may offer hope. However, any open brain surgery comes with its own risk of complications and recovery time.

"Laser surgery only requires a tiny incision about the size of a pencil eraser," UAB neurosurgeon Kirsten Riley, MD, said. "The key is matching the right patient to the right procedure. While in some patients epilepsy is generalized, this procedure is for those whose seizures arise from the same area. We need to be able to precisely identify the tissue to target for ablation. The problem is frequently found in the temporal lobe, though it can be triggered in other areas. We also carefully map the problem location in relation to areas that control speech, memory, cognitive functions and other critical structures so we can be sure there is a safe margin.

"Since the incision is small, risks are lessened and we can expect a faster recovery. Patients also tend to report less post procedure pain. It's a great option for patients whose epilepsy has a singular-seizure focus."

Candidates for LITT need to be well enough to undergo general anesthesia. Although it doesn't require removing part of the skull as an open procedure would, an entry point is drilled. A small hollow bolt is then positioned for introducing the laser tip, which can be withdrawn and reintroduced as needed. It also allows the introduction of a steroid medication which will be gradually tapered as the patient recovers.

"We guide the laser tip into place and check the exact position with an MRI before and after the procedure," Riley said. "This step will become much easier soon when our new intraoperative MRI is in the operating room and we can bring imaging to the patient rather than transporting the patient to imaging. We continually monitor temperatures in the surrounding tissue as thermal energy from the laser ablates the problem area.

"Patients who need the procedure but are uncomfortable with the idea of having brain surgery seem to be more at ease with undergoing a laser procedure. While open surgery has a cure rate of 75 percent, laser ablation comes close behind it with a 65 percent success rate and it can be repeated if needed. It can also be followed with an open procedure later in rare cases where it might be indicated."

Before UAB purchased its own LITT equipment, neurosurgeons tested units from each of the two manufacturers who make them, which allowed them to test the capabilities of each and select the best match for their work.

"There are only two LITT lasers in Alabama. In addition to our laser, which we use to treat patients 18 and over, Children's of Alabama also has a unit to treat epilepsy in younger patients," Riley said.

LITT ablation has been used in neurosurgery for a few years in other areas of the country and is likely to become more common here as insurance approves it for more types of procedures. Riley says there is a great deal of interest in using the technique in other types of neurosurgery.

"The equipment lends itself to very well controlled procedures. In addition to seizures originating in other areas of the brain, it could be very useful in treating tumors and radiation necrosis," Riley said. "This is particularly true in difficult areas since it allows more precision and less risk of bleeding when working near tissues responsible for critical neural functions."