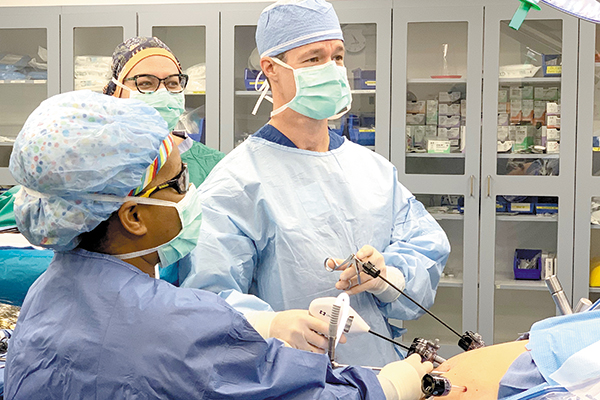 Recent studies have found that up to 28 percent of Americans suffer from gastroesophageal reflux disease (GERD). Many of these people have to deal with daily heartburn, regurgitation and other symptoms such as chronic cough and hoarseness. When left untreated, GERD can contribute to the onset of a serious disease like esophageal cancer. Unfortunately, many GERD patients are not satisfied with current treatment options.

With this in mind, Brookwood Baptist Medical Center has become the first hospital in Birmingham to offer a comprehensive team approach for treating the anatomical problems associated with GERD. Gastroenterologist Raj Parikh, MD, of Birmingham Gastroenterology and Brookwood general surgeons Brenden Haikes, MD, and Cameron Askew, MD, have joined together in the new surgical approach with cross-pollination of specialties to mesh their knowledge and expertise for fighting GERD.

Parikh points out that while the surgical procedure for GERD is not new, the cross-specialty partnership between these physicians is. "This collaboration provides expertise from both the GI and general surgery perspectives," he says.

Askew and Haikes repair the hernia and Parikh follows directly with an endoscopic Transoral Incisionless Fundoplication (TIF) procedure. "The TIF procedure has been around for over 10 years, but with the combination of Dr. Parikh's TIF 2.0 procedure and the hiatal hernia repair done by me and Dr. Haikes, we are seeing better outcomes and fewer side effects," Askew says. ""We still have traditional surgical fundoplication and medical management, and now we have something in between with a little lower risk and lower side effect profile than surgery; however, surgery is still needed for larger hiatal hernias and more severe cases."

Haikes says that 60 percent of the population over the age of 50 has a hiatal hernia but only 10 percent are symptomatic or have reflux or dysphagia. "If you think about it, that's still a large number of patients in the population of 300 million Americans. It's still a prevalent disease," he says. "Due to a nationwide increase in obesity, we are seeing a higher incidence of hiatal hernias and reflux disease which is directly proportional to weight gain."

These patients are often a high risk for esophageal cancer. "We do frequent surveillance endoscopies to keep an eye on patients to see if they develop cancer," Parikh says. "With the advent of HALO with radiofrequency ablation, we burn suspicious cells to try to avoid a morbid surgery. Our goal is always to improve the esopho-gastric (EG) valve."

The EG valve should be one-way, but with reflux it becomes a two-way valve. "Not only does liquid go down, but it also comes up. If we can repair that valve, which is the goal of these surgeries, it is still useful," Parikh says. "There are a variety of techniques to fix reflux, but our goal is to do something less invasive with fewer long-term side effects, if possible."

"The impact of TIF 2.0 is better for patients," Haikes says. "It has less impact on the stomach by not reducing the gastric volume or altering normal anatomy as much as a traditional fundoplication. Sometimes patients have gas trapping and more difficulty with dysphagia long-term, but with TIF, most patients have less dysphagia."

Parikh says the Birmingham program is growing rapidly, and patients are already coming from as far as south Alabama. "TIF has been around for eight or nine years, but it is becoming more mainstream. We are getting the word out. Surgeons are looking at gastroenterologists to do these procedures less invasively, and we are repairing small perforations with stents, new clips, and other devices we have now," he says. "If we can do something to fix a complication or do something less invasive to prevent a big surgery, it is certainly a goal for both gastroenterologists and surgeons. The TIF 2.0 procedure allows me to effectively treat the root cause of moderate to severe GERD and fills the treatment gap between pharmacology therapy and more traditional surgical options."