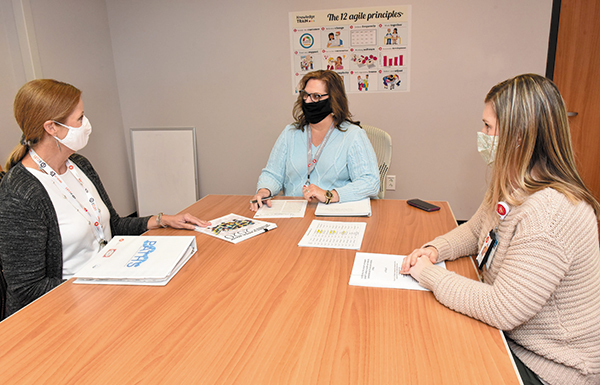 Children's of Alabama, in partnership with the Alabama Department of Mental Health, has found a way to help physicians facing the shortage of pediatric mental health providers in rural Alabama. The Pediatric Access to Telemental Health Services program, or PATHS, aids rural primary care providers in diagnosing, treating and managing mild to moderate behavioral health conditions in children and adolescents.

According to the CDC, almost 10 percent of children ages two to 17 years were diagnosed with ADHD (attention-deficit/hyperactivity disorder), totaling about 6.6 million in America. Another 4.5 million have a diagnosed behavior problem, and the same amount for anxiety. Complicating the diagnosis and treatment further is that in children with behavior problems, more than one in three also have anxiety and about one in five also have depression.

The need for this specialty care is more apparent among children living below the poverty level, where more than one in five had a mental, behavioral or developmental disorder. Couple this with the lack of pediatric mental health specialists in rural Alabama, and the burden on primary care providers and pediatricians in those counties becomes apparent.

"The PATHS program has developed a community of providers in what has previously been an isolated practice arena," says Susan Griffin, LICSW, PIP, CHCQM, director of PATHS at Children's. "These doctors, who may have been the only sole providers in their area, are now able to learn from each other which has been exciting to see."

For the past two years, with grant monies from the U.S. Health Resources and Services Administration (HRSA), Griffin has visited about 20 rural pediatricians and family practices so far, explaining the opportunities available through PATHS. "That personal visit tells them what we have to offer, so they understand up front and we can start that relationship right then," Griffin says. The first year, five practices enrolled. Last year, that more than tripled to 16.

The program revolves around three components, the first being an online collaborative training series of five to eight sessions each. Held during lunch hours every other week, the initial series in fall of 2019 drew 25 participants. "Then the next summer, we had 30, and by the third one this fall, we had 49. So you can see the growth," Griffin says. The topics have ranged from anger management and passively suicidal behaviors to anxiety related to Covid and trauma exposure.

The sessions follow the ECHO model with the Children's team of licensed behavioral health professionals and an infant/early childhood mental health consultant forming the hub and the enrollees in PATHS forming the spokes. The intent is to not only provide specialty knowledge from the mental health experts at Children's, but gain insights from each other on cases they've faced or are facing on that topic and what worked.

"It's not just the doctors who attend, either, but also their nurses, their NPs and their clinical assistants. You're training the whole group," Griffin says.

One physician, who includes his staff in the training, recently shared with Griffin the difference that made when a patient showed up in crisis. "He said, in the past, they might have struggled to know what to do, but because of our sessions, every one of his team members knew what they was needed," Griffin says. "The patient got their needs met because of the training we provided. That is a huge win."

The second component of the program enables the PATHS enrollees to call a dedicated line at Children's for a one-on-one consultation about a specific patient with a behavioral health professional. But Griffin stresses that PATHS is not a crisis service. "If a patient is truly in crisis, it's not appropriate to be seen by telemedicine," she says. "They need to be seen by someone close by or in our office."

The third part of the PATHS program is the telemedicine service. If a provider has consulted with PATHS and implemented treatment recommendations and the patient is still not improving, this component offers the opportunity for the provider to request that the patient be seen via telemedicine by a PATHS behavioral health clinician. Patients come to the pediatrician office, where they are already comfortable, and are able to connect with PATHS via telemedicine for an appointment. Griffin says this is one of the most valuable pieces of the program.

PATHS is not a passive learning endeavor. "It's a hands-on program," Griffin says. "The doctors hear what to do with a particular problem, specific information on how to manage the meds for certain diagnosis, but also very specific things for behavioral concerns." They receive a wealth of resources in paper or online sources after each training session, and get a written summary of recommendations from the Children's experts and the other providers who had been on the session.

"Many of these pediatricians are already doing this work," Griffin says. "But this is enabling them to do it even better, and with more confidence." Physicians also receive their Category 1 CME credit from attending the series. "The program is free of charge," Griffin says. "And their nursing staff can also get CE credit from the nursing board. There's not much reason for them not to engage with us."