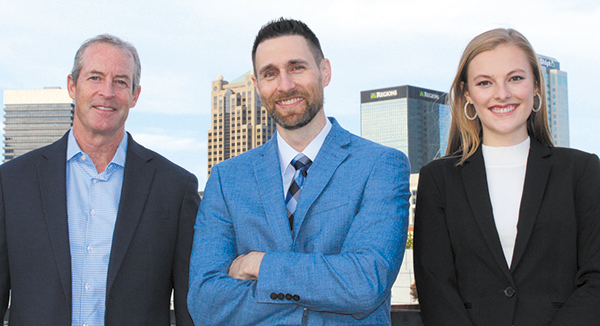 Andrew Smith MD, PhD, doesn't refer to the AI he helped to develop as artificial intelligence.

"We call it augmented intelligence, because it's designed to work interactively with humans to generate better information and facilitate better decision making," Smith said.

Vice Chair of Clinical Research and Director of the Human Imaging Shared Facility at UAB, Smith runs the Comprehensive Cancer Center's Tumor Metrics Lab. He is Director of Artificial Intelligence, Tumor Metrics and Entrepreneuership in Radiology.

After becoming frustrated by the lack of cutting edge information technology for radiology that could improve efficiency, accuracy, standardization and generate tools to make radiology more useful to physicians and patients, Smith put his interest in AI and software to work creating it.

"We designed a suite of software to work with multiple platforms, so there's no need to purchase specialized equipment," Smith said. "When 20 other institutions evaluated it, the feedback was very positive, especially regarding the faster patient analysis, higher accuracy and reduction in errors. Of 24 radiologists, 96 percent preferred our AI platform to the system they had been using, and 100 percent of the 20 oncologists preferred the more robust, detailed reports it gave them."

In addition to guiding and improving work flow, trials of the system showed a 25 percent improvement in efficiency, a 99 percent reduction in major errors, and a 55 percent increase in interobserver agreement with better standardization.

"When we are following a patient with advanced cancers or liver disease, it's important to get precise readings on any changes so physicians will have accurate evidence to judge whether a therapy is working or needs to be changed," Smith said. "Different radiologists may read imaging from one time to the next, or different people may be reading imaging for tumors in different organs. The AI platform takes any subjective influences out of the equation, precisely measuring and calculating very small changes."

One of the improvements in the speed of reporting is that the AI platform eliminates the need for radiologists to deal with the time-consuming task of dictating their findings. One touch is all it takes to generate digital reports that can be sent to the physician's computer, including a range of informational tools that can serve as visuals to improve communications with patients when discussing their case with them.

"In addition to text, the graphs, tables and key images can help patients see how they are doing and understand why their physician is recommending that they continue with a course of treatment or perhaps change medications or try a different approach to care that might work better," Smith said.

The AI platform has already been approved by the FDA and in the EU for use in tracking liver and kidney diseases, and FDA approval is expected within a few weeks for using it to track tumors in advanced cancers.

"When I told people I thought we could use this approach to track the progression of fatty liver disease and fibrosis, some of them actually laughed in my face. But as it turned out, the nodularity of the surface of the liver made a virtual liver biopsy possible, which is a less painful and less invasive way to screen for liver problems and track them," Smith said.

Although coming from a family of doctors might have influenced his career choice in any case, Smith's passion for helping others through medicine grew out of the loss of his physician grandfather to cancer.

"All of us have lost people to cancer," he said. "I wanted to make a difference. We are still losing 600,000 people a year to cancer, and that has to change. That's why I became a radiologist and why I keep working to find better ways to fight cancer and other life threatening diseases."

An advocate for kidney cancer patients, Smith, along with his team, did much of the early development of the AI software working in kidney cancer research. UAB investigators are now using the platform as a research tool to track CT and MRI findings of tumor response to potential new targeted therapies for solid tumors in advanced cancers.

To make the platform widely available, Smith founded and is president of AIMetrics, a company that is already attracting commercial interest nationally and internationally from as far away as South Korea. The project has also attracted major grants to further develop its potential.

"The AI has been trained on 60,000 tumors and we hope to reach 100,000 within a couple of months," Smith said. "The AI continues to learn. Although the FDA doesn't allow continual updating, the new information the AI learns is annotated and used in periodic upgrades so it continues to teach itself to become better.

"In the future, we hope to develop the AI to use with earlier stage cancers and other conditions such as brain lesions, aortic aneurysms and eventually, we hope, in clinical use in a broad range of radiology applications."