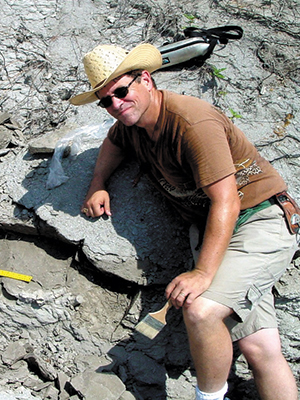 T. Prescott Atkinson, MD, PhD has a lifelong love of biology, a passion that led him to his career as a pediatric allergist at Children's of Alabama, and kindled his avocation in paleontology.

His dedication to that hobby has resulted in Atkinson receiving the first-ever Alabama Avocational Paleontologist Award from the Alabama Museum of Natural History and the Department of Museum Research & Collections, both of which are part of the University of Alabama Museums.

Atkinson has spent five decades collecting and donating thousands of fossils to multiple museums, including vertebrates, invertebrates, plants, and tracks. He has made a number of interesting discoveries in Alabama, including a Late Cretaceous dinosaur egg from Harrell Station and rare insect wings from the Pennsylvanian of northern Alabama. He also played a key role in the preservation and management of the Stephen C. Minkin Paleozoic Footprint Site (Union Chapel Mine) in Walker County.

Atkinson serves on the Board of Regents for the University of Alabama Museums. "They have a very substantial paleontology collection at the Museum of Natural History in Tuscaloosa. This award was established to try and foster paleontology in the state and encourage amateurs to go out and look for things and contact people at the museum. Occasionally very important specimens have been found by amateurs. They just have more eyes out there," he said.

After serving six years in the Navy, Atkinson chose medicine as his career, because he felt "it was a way to follow my interests and do some good for people at the same time." But his love for fossils has remained with him for life.

He grew up hunting fossils in the Montgomery area, finding sharks teeth by walking creeks with his friends. Under the guidance of a professor of biology at Auburn University, James Dobie, Atkinson and his friends visited sites and learned more about fossils as teenagers.

Now, as vice president of the Alabama Paleontological Society, Atkinson continues to study, visit sites and organize speakers in order to pass that knowledge along to others, as the Auburn professor did for him.

"When you take groups of kids out, you may spark an interest that will last a lifetime," he said. "It may be like it is for me: an avocation that's really life-enriching. It may change the course of their life for the better."

Atkinson said he was honored to receive the award for his work. "I was totally shocked. It was the first year the award was given, and I didn't know anything about it. I hope it stands as an encouragement for amateurs to know they can go out and make a difference in the science of geology and paleontology by interacting with professionals. Not everyone can be a museum curator or a professional paleontologist, but almost anyone can go into amateur paleontology and contribute."

He stressed the importance of the work by non-professionals, when they work with experts, and for seeking advice about whether to donate a specimen to a museum or keep it in a private collection. "Not all fossils need to be in museums," he said. "But if they are scientifically important -- a one-of-a-kind fossil or one of very few, or a spectacular example of a relatively common fossil - the best way to preserve them is to donate them to a museum. The professionals cannot really publish findings related to a specimen from a private collection. Other scientists need to be able to come and inspect a collection, which isn't a guarantee in a private collection."

His decades of pursuing this avocation have not dented his passion for the subject. "Even common sharks teeth are so beautiful," he said. "To look at it and realize how old it is and how long ago the animals that these teeth came from were swimming around in the ocean, it gives me a real thrill. When you find something like that and you hold it in your hand, you realize you are the first person in the world to ever look at this particular piece, and that goes for whether it's a common fossil or something relatively rare and unique."