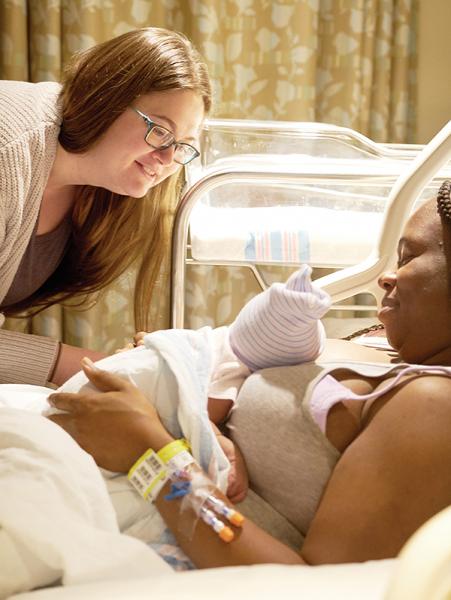 "We're thrilled. I knew we had good quality outcomes and I knew this was something we focused on, but I had no idea how well we stacked up against other hospitals in the nation," says Jesanna Cooper, MD, OBGYN and chair of the Women and Infants Department at Princeton Baptist Medical Center. They were named to Newsweek's 2020 list of Best Maternity Care Hospitals, along with Vaughan Regional Medical Center in Selma.

The list recognizes facilities that have excelled in providing care to mothers, newborns and their families, as verified by the 2019 Leapfrog Hospital Survey. A panel of national experts advised Leapfrog on standards for excellence in maternity care, including achieving low rates of C-sections and early elective deliveries, and following crucial protocols to protect mothers and babies, such as newborn bilirubin screening. The standards align with medical research and best practices, though not all hospitals achieve them.

Christy Smith, RN, BSN, director of Women and Children's Services at Vaughan, can point to no specific change last year for attaining the distinction. "We just focus on being aware of what is considered quality care and we work to implement those guidelines every day, every patient, and every delivery," she says.

The two gynecologists practicing at the hospital deliver an average of 440 babies annually, strictly adhering to best practices to achieve the better outcomes. "We don't do early elective deliveries," Smith says. "We take the time to educate expectant mothers on the importance of staying pregnant to 39 weeks or more. We're not fast to do C-sections, either. Episiotomies? Our doctors don't do that on everybody because not everyone needs one."

Their consistency is what Smith credits with Vaughan gaining the national acknowledgement, but notes that attention on the best practices as the only measurement in Newsweek's list could play a part. "I think the reason we've gotten recognized is that finally quality is being looked at a little more than quantity of patient satisfaction," she says. "The public needs to know the quality of the care you're getting is what is really important, not that the walls were painted a pleasing mint green."

Both Alabama hospitals that have achieved a place on Newsweek's list serve a similar, and often more challenging, population due to socio-economic and educational limitations. Around 95 percent of Vaughan's obstetric patients are on Medicaid, while Medicaid patients make up about 60 percent of the obstetric patients at Princeton.

"Seven years ago, we were at about 80 percent Medicaid," Cooper says of Princeton. "But because the model of care we offer now is appealing and unique, our patient population has become more diverse."

Princeton is the only hospital or OBGYN practice in Birmingham that uses a midwifery model of maternity care. "Usually, the physician is considered the team leader for the healthcare maternity team. We have tried to shift that culture so that we put the birthing person as the leader," Cooper says. The change made five years ago has drawn mothers-to-be from beyond the Princeton community to include Shelby County, Forest Park, Mountain Brook and as far north as Cullman.

"When you put the woman and her family first, and listen to them, you get good outcomes," says Sheila Lopez, CNM, RN, director of midwifery at Princeton-affiliated Simon Williamson Clinic. She is one of two midwives on staff and has been with Princeton for four years. "We've seen a lot of women with a history of preterm birth, and when they get into the midwifery model they tend to go full term or longer. One woman who had a history of two 36-week births went to over 39-weeks and no other risk factors changed except being in the midwifery model. We see that over and over again."

The two midwives manage around 90 percent of the vaginal births at Princeton, averaging around 30 per month. "Patients tell us it that our model is vastly different in the feel and thoroughness of their visits compared to other programs. They say they feel heard, respected and included in their care here, and they didn't feel that way in other births, and that's why they come here and wouldn't go anywhere else," Lopez says.

"Delivering the old way in a bed in stirrups is not our norm anymore now," says Pat Franklin, RN, BS, and nurse manager women's services at Princeton. Instead, the staff encourages women to get up and move around, try a variety of positions, and to utilize apparatus, like peanut balls and birthing balls, to find comfort and progress during labor.

"It's like a victory here every time someone has a vaginal delivery," Franklin says. "We have patients of the midwifery model who have had a C-section and went vaginal for their second birth. That's a big victory, and it works. It's very gratifying for the patient."