Fagan Wants to Prevent Health Problems Before They Become an Issue 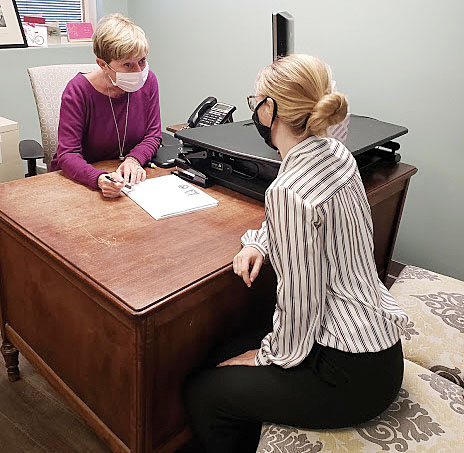 First appointments with Kimberly Fagan, MD can last an hour and half while she explores a medical history.

All medical practices have been affected in some way by COVID-19, and Fagan Sports and Lifestyle Medicine practice is no exception.

"Diet was an issue initially, when everyone was staying in," Kimberly Fagan, MD said. "A lot of patients were concerned about weight gain during the early times."

"We also saw an uptick in nutrition consults by phone," said Michael Brown, office manager. "Some folks had to learn how to cook for the first time because restaurants were closed. They came face to face with the reality that they didn't really know how to care for themselves."

Helping people learn to care for themselves is one of the goals of lifestyle management, and it is an aspect of practicing medicine that Fagan dreamed of pursuing for years. "It had been on my mind for a long time to combine my internal medicine skills and my sports medicine skills," she said. "Finally that came to fruition about six years ago. I've always been interested in finding ways to prevent health issues and injuries before they become a real problem for people.

"Our patients come from a variety of sources. My sports medicine patients may recognize that their performance isn't what it used to be. Or I have patients who come to me after they have seen their doctor and are told they don't have an illness, but they know they don't feel as good as they used to. They want to investigate further."

Fagan gives them time to dig into the details. First appointments can last a half hour and start with an extensive medical history. "We take time to listen," she said. "When did you first notice a problem? What might you feel is off? I want to know if there are gut issues. Thyroid, stress hormones, and adrenal glands all work together. We do a vitamin and mineral evaluation. Correcting deficits can make a big difference."

Fagan works closely with a patient's primary care physician and often gets referrals from other doctors. But she's clear about her role. "I'm not a primary care physician and I'm not trying to replace that doctor," she said. "Many physicians will refer patients to me who are experiencing fatigue, weight gain, or they just feel like their hormones are off. For a lot of doctors, that just isn't in their wheelhouse.

"I try not to prescribe medications. I try to do everything a natural way, usually with supplements or lifestyle changes that can complement what their physician has prescribed."

When the tests do indicate a need to prescribe hormones, Fagan prefers pellets, creams, or injections for men. "Pellets are well received," she said. "Forty percent of people don't absorb hormone cream very well, or they get erratic absorption." The pellets are put in under the skin and last three to four months for women and up to six months for men.

A large part of lifestyle medicine consists of teaching, but Fagan is also open to learning and adapting herself. She now offers CoolSculpt, a service she didn't think she'd ever include in her practice. "The people who encouraged me to get it were my athletes," she said. "It's about getting rid of pockets of exercise-resistant fat."

The non-invasive procedure freezes fat cells in the area that's treated. "Fat freezes at a higher temperature than other cells, so you don't damage anything around it. The cells die off slowly in about 12 weeks. Once those fat cells are killed off, they never come back," she said.

While she has a Physician Assistant to help in the sports medicine side of her practice, Fagan sees all the lifestyle patients herself. Those patients come from all over the state and she sees teens up to people in their 70s and 80s. "When it comes to aging, we want to see a plateau rather than a bell curve. We focus on preventative medicine," she said.

Unlike many lifestyle management practices, Fagan Sports Medicine does take insurance and Medicare, and the practice is not affiliated with any particular hospital system. "Cash pay practices can become very expensive for patients," said Fagan. "We wanted to make this accessible."

COVID-19 has heightened the concerns of some patients and made access to gyms and sports activities more difficult, but it hasn't changed the ability of Fagan to listen and be accessible to her patients.