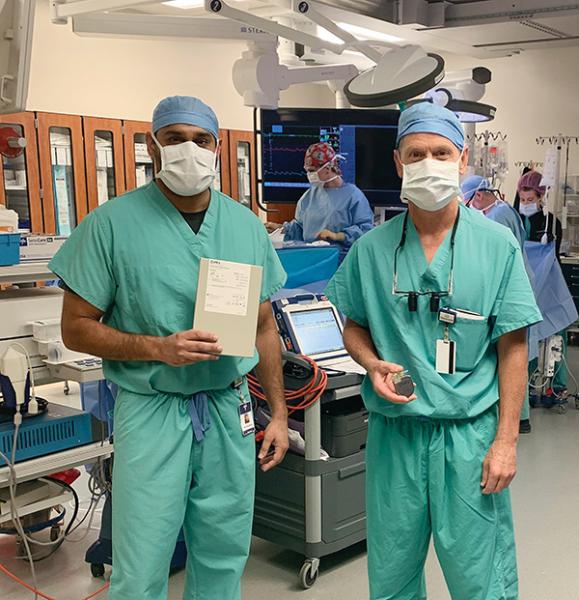 Heart failure affects six million adults and represents one of the most common cases of cardiac hospital admissions in the United States. The condition can range from mild heart failure to more advanced disease where patients are almost bedridden.

Despite advances in treatments, millions of people with systolic heart failure still have problems. Because the heart can't pump enough blood to sustain the body's needs, patients experience fatigue, shortness of breath, and swelling in the legs and ankles, among other symptoms. Many are even at risk of early death.

"Many of these patients can only walk a city block before having to rest and are limited in their ability to carry out daily activities. There aren't a lot of treatment options for them," says Anil Rajendra, MD, a cardiac electrophysiologist at Grandview Medical Center. "However, we have a new device that may bring relief for some patients. The Barostim NEO can improve quality of life, increase mobility and potentially improve heart performance and reduce hospital admissions."

Drs. Rajendra and John Casterline, a cardiac surgeon at Grandview, became the first in Alabama and third in the Southeast to implant the device designed to use the body's natural receptors and nervous system to lessen the impact of heart failure.

Advanced heart failure patients' bodies release hormones that adversely affect their heart function. "This new neuromodulation therapy, approved by the FDA about a year ago, is designed to trick the body into thinking it is functioning better than it does and by doing so, it decreases the hormones that are adversely affecting the heart," Rajendra says.

The main study of the Barostim NEO device showed that most patients were more active and felt better. The heart failure patients completed the Minnesota Living with Heart Failure questionnaire to evaluate their idea of quality of life. "Their quality of life was much better when they received the Barostim device. It also showed they were able to walk further after receiving the device versus patients who remained on medical therapy alone," Rajendra says.

The implant procedure is performed by an electrophysiologist and a cardiovascular surgeon. It requires an incision in the neck down to the carotid artery. Then, an electrode is sutured to the carotid artery where receptors in the body measure blood pressure and heart rate, and send information to the brain to monitor heart function. Another incision near the clavicle allows the insertion of a generator.

"When the device is turned on, it sends impulses through the electrode to the receptors in the carotid artery," Rajendra says. "That stimulation tricks the body and brain to think the heart is functioning better than it is. There is a feedback loop to the brain that tells the body that the heart is doing well, so we can have fewer hormones circulating. That will cut down on the release of those hormones over time and can help the heart function better."

Rajendra has performed one implant so far. "It takes some time after an implant to see improvement," he says. "We have to keep the implant turned off for a couple of weeks to allow the incisions to heal. After that, we slowly turn it on and the stimulation of those receptors in the body is increased over several months. It can take about two months to be fully functioning.

"Once the device is activated, the patient generally feels better, but it usually takes several months to realize the maximum benefit of the therapy. Quality of life was shown to be better through this pivotal study. The study is not completed yet, but the device was approved by the FDA based on quality of life data."

The study is ongoing and researchers will continue to collect data from patients. "There is a possibility that patients could live longer with this therapy, but we just don't know that yet," Rajendra says. "We also hope to see heart function improve. We saw a small improvement in heart function at six months, but we believe it will take longer to see significant improvement.

"We want patients to live longer with this therapy, but often in medicine we may not affect the natural history of the disease process. However, if we are able to improve patients' quality of life, I think that's still a win."