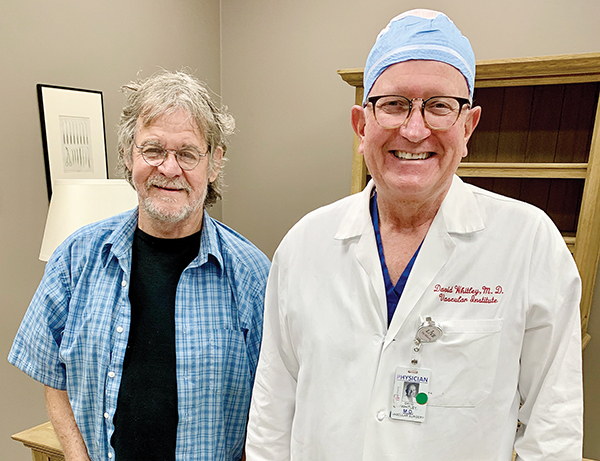 David Whitley, MD (right) with a patient after the percutaneous procedure.

"It's a big deal to be able to have this option," says David Whitley, MD, vascular surgeon at The Vascular Institute of Birmingham, and the first in the region to perform percutaneous creation of an arteriovenous fistula (AVF) in a patient using the Ellipsys device made by Avenu Medical. "These patients are already enduring so much discomfort and change in their life at this point in time, that this is a nice technique to offer them."

The minimally invasive procedure means Birmingham patients with End Stage Renal Disease no longer must go to a hospital for open surgery to create the enlarged vein needed for regular dialysis. "We used to make an incision and dissect out the artery and dissect out the vein. And then we have to open up the artery and sew the connection between the two in the operating room," Whitley says. "The surgery would typically require general anesthesia so the patient would have to recover from that, and it's kind of an all-day process."

The percutaneous approach requires a single needle stick in the arm. Using ultrasound, the surgeon guides the needle of the Ellipsys device, which is about the width of an ink pen tip, into the chosen vein, and then he or she crosses over to insert the other end of the device into the adjacent artery, leaving the two tiny pieces connected by a wire. When the two ends cinch up, they pull the two vessels together, linked by a circular hole--cauterized around the edges--that allows the blood to flow from the artery into the vein.

"That generates the fistula that the patient is eventually going to use for dialysis," Whitley says. "As soon as it creates the connection between the artery and the vein, we slide the device out and put a Band-Aid on the needle stick. So it's pretty cool. No incisions, it typically takes 15 minutes, and we do it in our office operating room."

Because the procedure only needs some mild sedation, patients are usually ready to leave within 10 to 15 minutes after the bandage is applied, all without an implant or suture, and leaving the vessels and tissue around the fistula undisturbed. "Being able to do this now with a fairly noninvasive procedure without multiple trips to the operating room is much better for patients," Whitley says.

A second percutaneous method follows the same concept, but involves no connecting wire. The WavelinQ, made by BD, uses magnets instead. "One part goes in the artery, and the other part goes in the vein," Whitley says. "When the two magnets line up, they pull the artery together with the vein, and then it burns an opening between the two."

Choosing between the two devices depends on the location of the fistula. The Ellipsys is used to create fistulas near the elbow, which is the most common location, including in open surgeries. The WavelinQ is utilized further down the arm, closer to the hand.

"The two devices allow us to offer this procedure to more patients, because one patient may not be a candidate for a particular device," Whitley says. "Probably right now, between the two devices, 60 to 70 percent of patients who need permanent access for dialysis would be a candidate for the percutaneous technique." The criteria are purely anatomical: the vein has to be close enough to the artery and the vein or the artery has to be large enough to get the device into. "And we know that ahead of time. We have a very detailed ultrasound looking at the veins and the arteries to see if a patient is a candidate."

The process does create a little different fistula. "It doesn't have quite as high of flow as a surgical fistula, but the flow is plenty high enough," Whitley says. "And the maturation rate on it is very, very high." In the Journal of Vascular Surgery, an April 2020 study of 234 patients with Ellipsys-made fistulas found the average pAVF flow was 923 mL/min a year later. The one-year primary, primary assisted, and secondary patency rates were 54 percent, 85 percent, and 96 percent, respectively.

Whitley says the procedure has recently become standard procedure, and Medicare no longer categorizes it as experimental as of July, removing most of the hesitancies to the technique. "If the patient is a good candidate for it, it's almost a no-brainer," he says. "It's a great way to proceed."