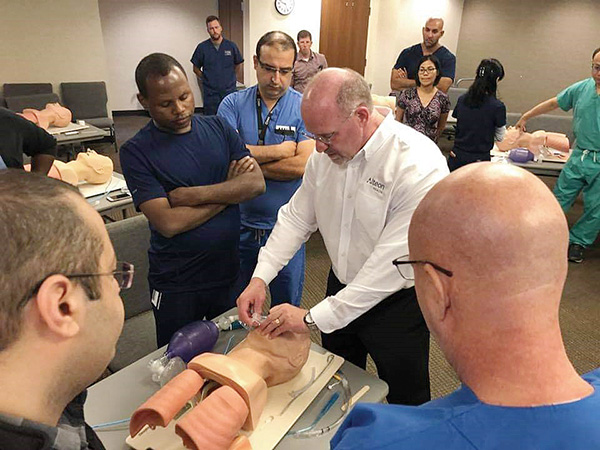 Several years ago, Bruce Burns, MD, FACP, recognized a shortage of Emergency Medicine physicians in Birmingham and other areas in the South.

It was 2015 and Burns, who is Regional Director for Alteon Health in Central Alabama, had just been named Chairman of the Department of Emergency Medicine at Princeton Baptist Medical Center. When he arrived there, he found that he was unable to staff the Emergency Room with enough doctors. This led him to begin to think about providing a post-primary Emergency Medicine fellowship.

"We realized that we weren't able to put together the three-year residency program at Princeton," Burns says. "With other residencies already in place and already being funded by the federal government, we could not receive federal funding for the Emergency Medicine Fellowship unless we cancelled one of the other programs. I didn't want to do that, so, I set up the Emergency Medicine residency using 100-percent funding through my company, Alteon Health.

"Instead of the traditional use of a recruiter to find doctors, I choose doctors for my fellowship. They spend a year with me and hopefully I can convince them to work for us. Since we started the Alteon Health Post Primary Care Emergency Medicine Fellowship, we don't have a position open in the Princeton ER. It has been successful, and we're fully staffed."

The gold standard for an emergency physician is to go to medical school and then do the three-year residency. "Nobody argues that, but if we relied only on those physicians to staff emergency rooms, we wouldn't have enough," Burns says. "Those programs aren't large enough, and they don't turn out enough doctors. Later in their careers, many Emergency Medicine doctors end up in Urgent Care or another specialty, so the ER work force depletes."

Burns can train primary doctors in a year through the Alteon fellowship, because they already know the basics of medicine. "We teach them lifesaving procedures, how to run an Emergency Department and mold them to think like an emergency physician instead of an internal medicine doctor," he says.

"We take primary care doctors, preferably ones who have just finished their residency and are starting their career. We sometimes take mid-career physicians but prefer to take people who couldn't get into an Emergency Medicine residency because it was full," Burns says. "We want people who are committed to Emergency Medicine, not people who just want to make a change."

Alteon Emergency Medicine fellows begin their fellowships with a two-week boot camp that includes an eight-hour airway course for learning to relieve respiratory distress. They learn to put oxygen on a patient, intubate a patient, or perform a surgical airway. Other courses teach splinting. They also learn EMS protocols working with Birmingham Regional Emergency Medical Services System (BREMSS), where Burns is chairman of the board. Following the camp, the doctors begin working shifts alongside an emergency physician.

With each seminar, Burns gives a glimpse of local entertainment. For instance, the gunshot wound seminar is held at Hoover Tactical and after a four-hour clinic, the doctors go to the shooting range to learn how to safely manage firearms. A trauma conference at the Talladega Motor Speedway includes morning lectures and an afternoon of riding laps with the speedway drivers. Other courses include a snake bite seminar at the Birmingham Zoo, and a sports medicine seminar associated with the Birmingham Barons.

"The whole idea behind this fellowship was not just for me to train ER doctors," Burns says. "I have shown these physicians multiple places of interest in the Birmingham area, so I'm also selling them on living here so they will stay and work with my company."

Alteon also has a collaboration with Children's of Alabama to provide training for treating pediatric patients. "We use their simulation lab four times a year to teach our physicians to care for children with respiratory problems, neurological problems, seizures and trauma," Burns says.

Advanced Practice Providers (APP) also plays a large role on Burns' team. He has teamed with the UAB School of Nursing's fellowship program, and two nurse practitioners spend six months in the Emergency Department at UAB and six months at Princeton/Shelby. The program is called ACE (Augmented Clinical Experience). "A lot of emergency medicine is provided by physicians, but nurse practitioners and physician assistants are also valuable in our department," Burns says. "We train these practitioners, and I have APPs who function as well as any physician."