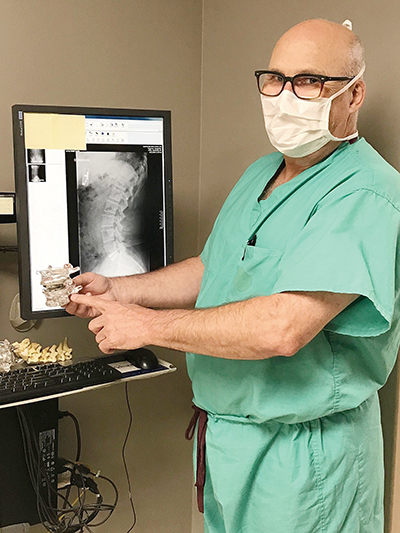 A new option has arrived in Birmingham for people who suffer from chronic lower back pain. "It's the first modern lumbar disk replacement that looks well designed and may be more widely applicable to more people," says CJ Talbert, MD, the orthopedic surgeon with Southlake Orthopaedics who performed the first ActivL Artificial Disc surgery in the area.

The motion disc, which consists of a plastic insert between two metal endplates, is the only device that can relatively mimic the translational and rotational movements of the spine. That movement has proven crucial to maintaining the health in the rest of the spine. "If you can maintain the motion segment and decrease the pain, you may lessen the chance of adjacent disc desiccation, which tends to afflict around 20 percent of those suffering from degenerative disc disease (DDD), even after fusion surgery," Talbert says.

The post-hoc analysis from the activL Artificial Disc FDA study supports the advantages of keeping the spine mobile. It found that for every degree of motion maintained, patients experienced a lower incidence of adjacent segment disease (ASD) at five years.

The disc, manufactured by Aesculap, was approved by the FDA to reconstruct a damaged disc at one level (L4-L5 or L5-S1) in 2015, but was not readily covered by insurance. Only 13 percent of insured Americans had coverage options for lumbar disc replacement at the time. But when a panel of surgeons at the 2017 North American Spine Society Annual Meeting concluded that the evidence supported it as a standard of care, acceptance grew. Last year, UnitedHealthcare announced their coverage of the procedure, and now Aesculap estimates that around 73 percent of Americans with commercial coverage now have access.

Not all those suffering from DDD qualify for the motion disc, though. Age is a factor. "Usually, the disk is collapsed in people over 60 and the facet joints are worn out," Talbert says. "Though the activeL is one of the narrower discs made, which is good." Its slim 8.5mm height makes it more widely compatible with people in the targeted age range of 20 to 59 who have not found pain relief from at least six months of nonsurgical treatment.

"It's a last resort. If a patient experiences daily pain between three to five on a 10-point scale, it's not worth it, because even with an artificial disk, you're going to experience two to three out of 10 on some days. But if you're having six to eight level pain on a daily basis and can't pursue what you want to pursue, it's heaven."

The high expectation of zero pain often unrealistically diminishes the perceived improvements for many spinal surgery patients. Talbert's first patient with the activL--a 40-year-old with chronic pain in the L5-S1, which is the most commonly afflicted disc--initially had zero pain following the surgery. Two months later, she's having some return of the discomfort. "But it's not as bad as it was," Talbert says. "Perfection is not yet attainable. Most of the time with artificial discs and lumbar fusions, people still have trouble. But it's more tolerable than they had to begin with."

The surgery requires no unique techniques nor produces any new risks. "It takes less than an hour to do the surgery and it's similar to putting in LT-cages and interbody grafts and plates, which we do all the time," Talbert says. "It's as easy as that and you don't mess up your back muscles." Six weeks after surgery in the clinical trial, activL Artificial Disc patients had nearly a threefold decrease in back pain and improved range of motion.

This marks a notable advance for people suffering from lower back pain. "It's exciting, because we would like to keep your spine moving, instead of fusing," Talbert says. "This is one of the few lumbar discs that has been approved in the modern era by the FDA that people are using more widely." Around 250 have been implanted in the U.S. so far, but nearly 8,000 have been surgically inserted throughout world.

"We finally have a disc replacement that seems to be effective and has over 60 percent good to excellent results, which for spine is a good thing," Talbert says.