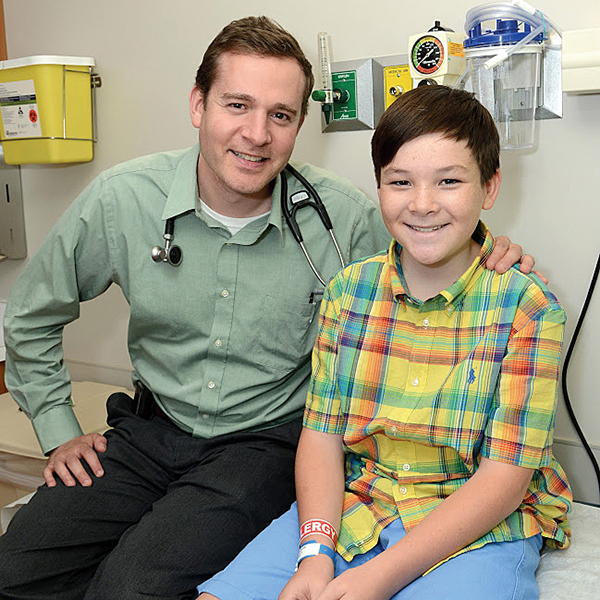 UAB & Children's Only Institution in the World Leading This on Adults, Children & Dogs

The trials are a result of many years of herpes virus research at UAB, according to Gregory Friedman, MD, director of Developmental Therapeutics and associate professor in Pediatric Hematology-Oncology at UAB.

"Researchers began to study the virus as a cancer therapy," Friedman said. "They discovered that there is a specific gene in the herpes virus that can be removed and altered so that the virus cannot harm normal cells, but it can still kill cancer cells, and at the same time, stimulate the patient's immune system, resulting in a dual attack from both the virus and the immune system."

Studies on adults first showed the safety and efficacy of this treatment. When Friedman's lab research showed that pediatric tumors might be even more sensitive to the virus, Children's began their own clinical trials.

A dozen children have now been treated with the genetically engineered oncolytic HSV-1 called G207.

The procedure entails insertion of catheters directly into the tumor while the patient is in surgery for a biopsy. Upon confirmation by a pathologist that the tumor is recurrent, the catheters are placed. "It's not as invasive as having the tumor completely removed, which requires a much bigger procedure," Friedman said. "This can be done with a really small surgical opening. The study neurosurgeon, James Johnston, MD, associate professor of Neurosurgery, reviews the MRI and develops a plan to place up to four catheters to cover the largest area of the tumor."

The child recovers in the ICU, and the next morning a scan is used to confirm the catheters are correctly placed. Then the doctors start the infusion.

The slow infusion takes six hours, to spread the virus as widely as possible through the tumor. An hour after the infusion is completed, the surgical team removes the catheters and closes the small surgical site with a stitch.

"Typically on the day following the procedure, the children are sitting up in bed watching TV and interacting normally. They rebound very quickly. They can even get up and go to the bathroom. The actual infusion is pretty unremarkable," Friedman said.

Similar viruses are also being tested in adults. "The next generation of viruses that are being tested have human and other foreign genes inserted into them in an attempt to maximize virus replication or the immune response," Friedman said. "Based on what we are seeing, we think this type of immunotherapy will likely be part of a combination type approach, using the virus along with other newer drugs such as checkpoint inhibitors that help the immune system recognize the tumor. The two together may be an ideal combination.

The viral therapy is even being investigated for use in dogs. "Engineered herpes viruses are being used in adult studies by Dr. James Markert, chair of Neurosurgery, at UAB and also in a clinical trial for dogs by Dr. Rene Chambers," Friedman said. "The closest place dogs are being treated is in Auburn, so those are being done through vet hospitals at various sites."

Travel restrictions due to the coronavirus have complicated the studies, since the majority of pediatric patients treated live outside Alabama, but the clinicians are moving forward despite the difficulties. "We have opened up a second pediatric clinical trial to test the safety of the virus in brain tumors that arise in the cerebellum, and we are developing a Phase 2 trial to look closer at the efficacy of the treatment," Friedman said. "We want that study to be multi-institutional, up to five or six institutions. Each site will have to be trained. We plan to work with one of the national pediatric consortiums that focus on brain tumors."

The process is lengthy and that next phase is likely six to 12 months away. "In the meantime we will finish this first study and get the results out," he said. "We hope there won't be a big gap between studies."

Friedman acknowledged the significance of these studies for everyone diagnosed with progressive malignant brain tumors. "We are the only institution in the world that is leading these type of trials in adults, children and dogs as well," he said. "UAB and Children's of Alabama are at the forefront of this immuno-viral therapy research. We hope it will have a huge impact on improving outcomes for children, adults and even pets with malignant brain tumors that are so deadly."