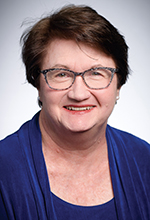 There's a lot to love about living in the southeast--earlier springs, friendly people, rolling green hills and sandy white beaches. But in the 11-state area generally referred to as the Stroke Belt, there is also a downside.

People who live in our region tend to have more strokes, obesity, diabetes, hypertension and a wide range of related health issues that put us at risk for poorer quality of life and an earlier death.

It doesn't end there. In fact, by digging into subsets of data from the nationwide REGARDS investigation (Reasons for Geographic and Racial Differences in Stroke Study), UAB epidemiologist Virginia Howard, PhD, FAHA, FSCT, and her colleagues have found that something about beginning life here sets the stage for a greater risk of cognitive decline in later years.

Spending at least part of the early years in another area seemed to have a protective effect. The big question is why. Answering that question is the next step in following the data.

"There are several hypotheses we need to investigate. Could it be related to learned behaviors such as food preferences, activity patterns and health habits like smoking?" Howard said.

Other factors could be influenced by another strong demographic that overlays the stroke belt--the poverty belt. Some of the poorest areas of the nation are here, which can make access to health care and healthy food difficult. Living with the perpetual stress of money worries and lower paying, physically demanding and less secure jobs can contribute to hypertension and unhealthy behaviors.

"Quality of education could also be a factor," Howard said. "There are major differences from one neighborhood to the next."

In addition to limiting opportunities for better jobs that come with higher earnings, health insurance and the resources for healthy food and the leisure time to exercise and rest, students may be missing out on learning how to learn. This could make it difficult to know where to start if they need to learn more about a health issues, don't understand what their health care provider is saying, or have questions they are reluctant to ask.

"REGARDS is an ongoing nationwide study of more than 30,000 people age 45 and up that began almost twenty years ago," Howard said. "We enrolled a diverse cohort that is 50 percent African American and 50 percent Caucasian and other ethnic backgrounds. In-depth interviews have given us a great deal of information about our subjects' lives and health and how their health status is changing.

"We follow up with telephone interviews every six months. For the cognitive study, we did not include any participants who had had a stroke. We asked 20,436 subjects questions and did cognitive assessment exercises that were aimed at detecting changes in memory, thought processing speed, and comprehension. Another part of the study looked for links to other aspects of cognitive decline, such as dementia.

"Through this study, we hope to identify factors in early life that could be targeted for change to improve health. We will continue following participants in the years ahead to learn as much as possible about how the people of our region and country can be healthier and enjoy a better quality of life.