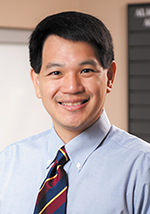 Peanut allergies are the second most common food allergy in children, occurring in about one in 50 kids. "There is no cure for peanut allergies other than avoidance, so families naturally have a lot of concern about accidental contact," says Weily Soong, MD, who practices with Alabama Allergy & Asthma Center. Fortunately, the worst of those worries for families could be alleviated somewhat with the first FDA-approved therapy in February for patients with peanut allergy. And it's a pill.

"The new pill, called Palforzia, is not a cure," Soong says. "It reduces the chance of having an allergic reaction, including anaphylaxis, to accidental exposure to peanuts. A child should still be labeled as peanut allergic, but it gives parents, along with the school and its staff, a bit of comfort, knowing that if an allergic child is sitting next to someone eating a peanut butter sandwich, he will likely be okay."

A clinical study of Palforzia in the November 2018 New England Journal of Medicine, showed a remarkable tolerance build-up to peanut allergen. 500 children, ages four to 17, who were highly allergic to peanuts, underwent the peanut oral immunotherapy or were given a placebo.

At the exit food challenge, where the children gradually ate increasing amounts of peanut protein under medical supervision, 67 percent of those who received Palforzia were able to ingest a dose of 600 mg--approximately two peanuts--without dose-limiting symptoms compared with five of 124 participants (four percent) who received the placebo.

Traditionally, reducing allergic reactions has been accomplished only for environmental allergens through injections or sublingual drops under the tongue. "This is innovative because it is not only the first FDA-approved treatment for foods, but it is also the first oral way of doing immunotherapy through the gut for any allergen," Soong says.

The pill is actually a capsule filled with purified peanut protein that the patient breaks open and sprinkles on food, such as yogurt or pudding, to ingest each day. On the first day, the patient undergoes initial dose escalation (OTI) in the office with an allergist who has been certified by the pill's manufacturer, Aimmune Therapeutics, and the FDA. "You have to be certified to ensure you have the right equipment and policies in place because of the risk of having an allergic reaction during the dosing protocol," Soong says.

That initial session includes a series of five increasing doses of the capsule from 0.5 to 6 mg of peanut protein, 30 minutes apart. Next, the dose is gradually increased, every two weeks over a 22 week period, until the patient reaches a dose of 30 mg. "Then for the rest of your life, you take a 300 mg dose every day which is considered the maintenance dose," Soong says.

The possibility exists that some patients could develop a complete tolerance to peanuts. "We really don't know yet, but further research will hopefully identify those patients who can go beyond the 300 mg peanut level," he says.

A possible barrier to the treatment lies in the cost of $890 per month for the rest of the patient's life. With the pill not likely to be available until summer, insurance coverage is currently unknown.

Peanut allergy patients have already had access to peanut oral immunotherapy for the past several years, but it has been through off-label products. Wesley Burks, MD at Duke University Medical Center, first demonstrated the success of the process in 2009. In a pilot study at Duke and Arkansas Children's Hospital, researchers gave 29 children a few crumbs of peanut flour--equivalent to as little as a thousandth of a peanut--in applesauce or pudding, and updosed over months with a little more each day.

Once the patients could eat about 15 peanuts at once, they went on a maintenance dose of eight peanuts a day for years afterward. Since then, oral immunotherapy studies have followed the updose and maintenance pattern. And that led to some allergists offering their own OTI option, often following Duke's protocol.

"It's been done nationwide for over five years, and everybody's protocol is somewhat different," Soong says. "The differences may be slight, such as using a slurry of protein instead of a powder. We have had experience doing oral immunotherapy with a peanut slurry for about two years, and have been involved in Aimmune's Palforzia clinical trials, so we are set up to offer Palforzia to patients when it becomes available."

The positives of a government-approved product go beyond the therapy itself. "It's the awareness that the FDA-approval brings," Soong says. "There are parents and adults who have always avoided peanuts and are not quite up to date with what's out there. And it will take media coverage to make them aware of oral immunotherapy for their food allergy."

The FDA-approved treatment will also get more people talking about peanut-allergy therapy, including for adults. "They have notions that it takes a lot of time and is costly," Soong says. "This could bring them back into the office to have a good discussion about their options again."