Tale of Two Nurses: Niece Donates a Kidney to her Aunt 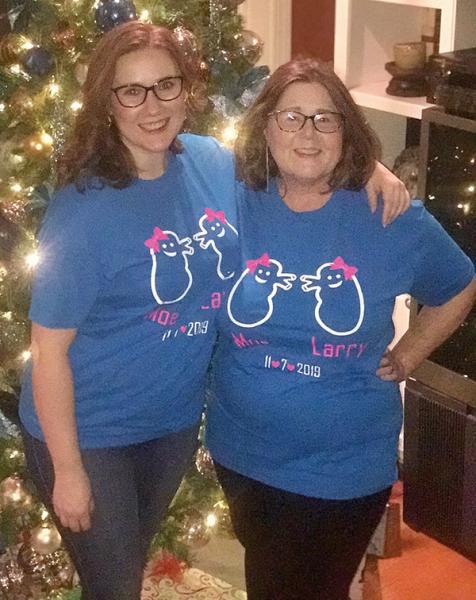 Rebecca Harrison (left) and Sue Gravelle named the kidney that Harrison kept Moe as in "no mo to give" and Larry, which went to Gravelle.

If you ask Rebecca Harrison, RN and her aunt, Sue Gravelle, RN, about sacrifice, they will each point to the other. But last November, Harrison put her life on hold--and at risk--to give one of her kidneys to Gravelle.

Gravelle's battle with kidney issues has been a source of discomfort all her life. She was diagnosed as a child with urinary reflux disease from an anatomical lack of development and had her first kidney transplant, donated by her mother, in 1973.

As a child, she spent a lot of time at Grady Hospital in Atlanta in an adult unit. Renal failure was unusual in pediatric patients, and the nurses took special interest in a child under their care. The time Gravelle spent with those care givers shaped her life.

"Considering all the time I spent in the hospital, I had a very positive experience with the health care staff, so I've known since I was little that I wanted to be a nurse," Gravelle says. "I'm compassionate with patients, partially because, as a chronic patient, I've been on both sides."

The original transplanted kidney lasted 47 years before Gravelle began to experience Stage 4 renal failure. As a nurse and patient, she knew Stage 5 was coming because she was familiar with the signs of nausea, vomiting, extreme fatigue and lack of appetite.

"Rebecca and I were pretty aggressive about getting me on the transplant list and following the process," Gravelle says. "The hardest thing was that I had to quit work in June. I had been working four nursing jobs, and I love them all."

Gravelle and Harrison have always been close. When Harrison was in high school, she told her aunt that if ever she needed a kidney, she would give it to her.

"She called me in April when she got her Stage 5 diagnosis," Harrison says. "I knew we had to get the ball rolling. I decided it was time to come home when her labs got worse."

Harrison, who lived in North Carolina, began reaching out to UAB regularly in her goal to get on staff back in Birmingham and her relentlessness paid off. She worked on test procedures for qualifying as a donor, even as she drove south to Birmingham, keeping a cooler close by as she stopped at convenience stores along the way, collecting her 24-hour urine samples.

Harrison moved to her aunt's farm in Trussville and continued the testing, undergoing a CAT scan to be sure things looked anatomically correct and had their blood samples mixed to ensure compatibility.

"I had never had a blood transfusion or surgery and never had a pregnancy," Harrison says. "That was an advantage because any antigens I had could have attacked Sue. We ended up being a 90 percent match."

Harrison is nonchalant about having given something as valuable as an organ, with the attendant pain and lengthy recovery. "People told me it was an amazing thing to do," she says. "But that's what you do for family."

As a nurse, she often sees critical issues that help her put things in perspective. But like her aunt, she's accustomed to a busy schedule, which made the down time after the surgery difficult.

"The worst part was the first couple of weeks," she says. "I'm a busy person, and I'm not used to having to rely on people to help me do things. The biggest thing was not pushing myself too hard. I did that a couple of times, and it didn't work out well."

She says her takeaway from the surgery is that the health care system overcomplicates organ transplantation. Even with their personal experience in the field, it was a difficult battle to make things happen.

"My aunt and I have knowledge of how the health care system works, and we kept pushing to get things done," Harrison says. "Some people get so frustrated, they just give up."

"This will make Rebecca an even better nurse," Gravelle says. "She has been taking care of me off and on and now she got some good experience navigating healthcare issues. There's no way to express appreciation for all she's done."