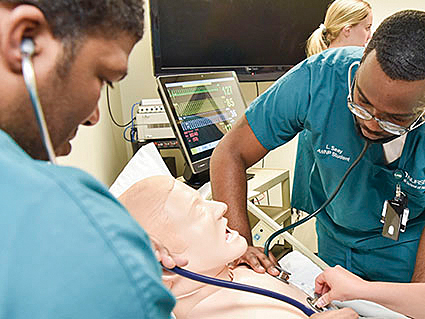 The number of men who choose to enter the nursing profession continues to increase in the United States, according to the U.S. Census Bureau, and the School of Nursing at UAB was recognized for its efforts in promoting male nursing students when it was named one of the 2019 Best Schools for Men in Nursing by the American Association for Men in Nursing. UAB is one of 12 nursing schools to receive this award.

"To be part of the national award recognition is a humbling experience," said Curry Bordelon, assistant professor at the UAB School of Nursing and president of the Birmingham chapter of the American Association for Men in Nursing.

Bordelon says the number of male faculty and students at the School of Nursing has continued to increase over the last several years and is well above the national average. In part, this is due to active recruitment efforts, as well as the emphasis the school places on the importance of a diverse nursing field.

"Male nurses can be found in a variety of nursing roles from neonatal and pediatric care to emergency services or palliative care, to name a few," Bordelon said. "To best meet the needs and empathize with the diverse patient population we care for, a diverse care team is needed. The inclusion of men in all specialties of nursing supports the development of a diverse care team."

UAB is one of three nursing schools in the Southeast and the only one in Alabama to receive this award.