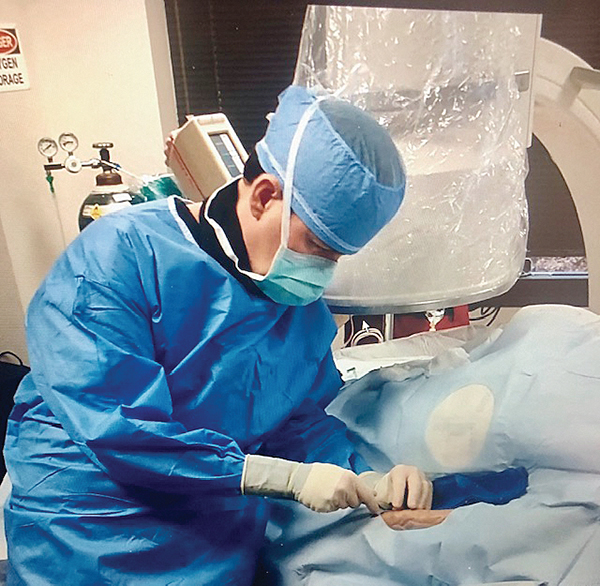 When performing an arteriogram for treating peripheral artery disease (PAD), the cardiologists at Birmingham Heart Clinic have adopted a "pedal first" approach, in which the pedal vessels are entered around the ankle. While this procedure is not unique in Birmingham, Robert H. Yoe, IV, MD, FACC, says that it is still relatively rare for cardiologists to adopt pedal access as the first choice.

"This procedure is the radial equivalent of a heart cath," he said. "It is easier for the patient when we enter pedal first because we can remove the access sheath immediately after the procedure and place a small sealing band around the ankle which results in less bleeding risk. And the patient can leave two to four hours after the procedure.

"We have found the pedal access to be as effective as femoral access. Pretty much anything you can treat from the femoral area can be treated using pedal access. There aren't long hospital trials yet, but everything is looking quite positive."

When BHC patients present with PAD symptoms, the physicians check the ankle-brachial index (ABI), which should be less than 0.9. "If it's not normal, we typically follow that up with an arterial ultrasound, to look at the flow through the superficial femoral, and popliteal arteries. We can see if there are any abnormalities," Yoe said.

Yoe also performs peripheral angiograms with the pedal approach. "We insert a small catheter in the right radial wrist and a catheter in the aorta though an abdominal aortagram. We have found that the pictures we get from the radial angiogram are much clearer than with a computed tomography angiography or magnetic resonance angiography. We can use smaller amounts of contrast so we can see all the runoff vessels really well.

"Most cardiologists would follow up at this point with femoral arterial access. That's uncomfortable for patients because they have to lie flat for four to six hours after the procedure, but there's also an increased risk for retroperitoneal bleeds. Through the medical literature, we discovered how much better radial access can be. We use ultrasound access to achieve pedal access. We take the images from the wrist. It allows us to do procedures more quickly, with less risk for bleeding, and patients can walk off the table and sit in a chair afterwards and leave the cath lab in one to two hours."

In most cases, Yoe will get pictures in one procedure and schedule the arteriogram later. "We can show the patients the pictures before, show them where we will be entering in their ankle, and then pursue the case," he said.

While BHC is having success with arterial pedal intervention, Yoe points out that the first line of defense for treating PAD is getting a referral and diagnosis to begin with.

"It's amazing how many physicians don't refer their patients with PAD or even check for it," he said. "Once patients are in the critical limb ischemia territory, their mortality at one year is nearing 25 percent. That's pretty high. Up to 50 percent of PAD patients don't even know they have it. It's really important to do an ABI on patients who have ever smoked cigarettes or are diabetics or are over the age of 50. If the ABI is less than 0.9, or if a pulse volume recording (measuring the pressure going through the limb) looks abnormal, they should be referred to a PAD specialist. Most of these patients have coronary artery disease as well.

Yoe particularly emphasized the importance of exercise for these patients. "Exercise is critical. Even without treatment, it will help a lot if you get these patients on good guideline directed medical therapy and exercise them," he said.

He also stressed the importance of PAD specialists working with other physicians for patients who may be diabetic or who need wound care. "We are all one group working together," he said. "It's paramount that we restore the blood flow while other physicians are helping with wound care and the endocrinologist is helping control the diabetes. It's all integrated."

Yoe said BHC is doing 80 percent of interventions pedal access first. Based on results in medical literature and his own experience, he estimates that within five years most cardiologists will have moved to this approach.