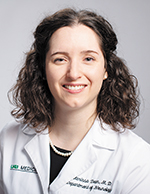 For most of her life, a young woman had been a medical mystery. At age five, her lower limbs began to show impairment. The cause eluded physicians. As an adult in her 20's, she could no longer walk and had a hand tremor, severe spasms in her legs in the evenings, intermittent slurred speech, and occasional tingling in her digits. And still no answers.

In 2014, she turned to the UAB Undiagnosed Diseases Program in the Department of Genetics, which serves as a last resort for cases that have baffled numerous medical professionals. The UDP performed extensive diagnostic tests that did not reveal a clear cause. After this, the UDP had the HudsonAlpha Institute sequence her whole genome.

"They were looking for known mutations, but also looking for anything else not normal," says Marissa Dean, MD, assistant professor in the Department of Neurology and the first author of the case study published in the September 9, 2019 issue of Neurology, the journal of the American Academy of Neurology. "It's very difficult in general to determine whether you found something new that may be causative, because it's never been described before."

But something did show up. The sequencing revealed a never-before described mutation in the ADCY5 gene. Other variants of that gene have been associated with childhood movement disorders. The parents' tests, however, proved that the variant did not originate with them, making it a rare spontaneous mutation.

"ADCY5 mutations have been associated with a movement disorder that begins in childhood, but where we found the mutation was in a different location than previously described," says Dean, adding that everyone has millions of different variants or changes in their DNA, but rarely do any of those variants cause a disease.

With the variant identified, the group ran computer analytics that would help reveal the potential effect of this unique mutation in that location. "It can tell you what that change looks like in the protein--does it cause damage or look significantly abnormal? Does it look like it can still function in the same way it was supposed to?" Dean says.

The UDP followed the guidelines of the American College of Medical Genetics and Genomics compiled to help clinicians discern if a new mutation is likely or not to be responsible for the symptoms being displayed in a patient.

"We used those criteria and came up with the conclusion that the variant was predicted to be the likely cause of the woman's condition," Dean says. "We were ultimately able to give the family a diagnosis of dystonia with spastic paraparesis, likely due to the variant in the ADCY5 gene.

"No treatment exists to reverse the effects of the variant, but the patient and family now finally have an answer. They spent so many years wondering what was wrong. Now that we know what it is, we don't have to spend half the visit on what it could be. Instead, we can focus on what it is, and what we're going to do."

The woman's treatment is geared toward lessening and handling the symptoms through supportive therapy, including occupational and physical therapy, equipment to use in the home, and medications to treat the muscle spasms and stiffness.

Dean believes this rare mutation may be more common. "This is one of the reasons we're excited we got the case published and got that information out there," she says. "Because maybe someone else has the same mutation and, without getting new cases published, there's no way to know about those other cases."

Because of the discovery of this novel mutation, the case study also calls for the addition of ADCY5 to gene sequencing test panels for spastic paraparesis.

For young patients who develop spasticity and dystonia, Dean says she would consider ADCY5-associated dyskinesia as a cause. "We recommend that for a patient presenting with childhood onset spastic paraparesis, an MRI should be included in the initial workup," she says. "Once evidence rules out treatable conditions, then genetic disease can be considered. At UAB, we have genetic counselors to help in ordering genetic testing, which can be extremely useful for the ordering provider."