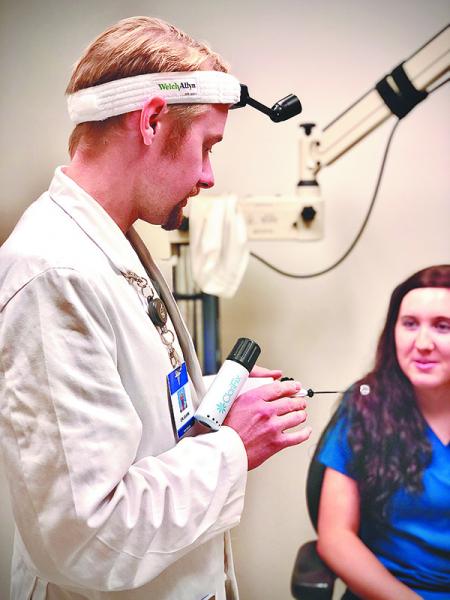 Christopher Clark, MD has performed several hundred Clarifix procedures beginning with his fellowship at the University of Texas.

This July, ENT Associates of Alabama introduced a new innovative procedure for the treatment of chronic rhinitis, a condition that affects up to 58 million people in the United States.

Chronic rhinitis is the result of nasal inflammation. "There are two varieties of rhinitis," said Christopher Clark, MD of ENT Associates. "The most common is allergic rhinitis, which is driven by an inflammatory immune response to aeroallergens, and can be treated with topical nasal medications and oral antihistamines.

"By contrast, non-allergic rhinitis, which can be a year-round condition, is an inflammation of the nasal lining that is triggered by irritants like certain foods or drinks, smoke, pollution, or changes in the weather, to name a few."

The nasal cavity is lined with turbinates, small bones that are covered with a myriad of blood vessels that shrink and swell in order to warm, humidify and filter the air before it reaches the lungs. The nose is also assigned the task of making mucus, which provides an immunologic barrier to virus or bacteria that can enter through the nostrils. Both of these functions are controlled by the posterior nasal nerve branches (PNN) that reside in the back of the nasal cavity.

In the case of non-allergic rhinitis, the PNN may respond to various environmental triggers by upregulating mucus production, causing a nasal drip, and by vasodilation of the turbinates causing them to swell, resulting in congestion. And in some patients the PNN has a haywire signal that overstimulates mucus production.

"The first-line treatment for non-allergic rhinitis is primarily environmental avoidance, nasal saline irrigations, and topical medications," Clark said. "Most patients have a good response to these treatments.

"However, there is a subset of patients who either cannot tolerate topical nasal medications or have failed to receive benefit from them. For years, the only other treatment option for these patients was Vidian Neurectomy, which is a surgical procedure involving ligation of the parasympathetic innervation in the nasal cavity responsible for congestion and drainage. This procedure required general anesthesia, had significant risk of postoperative bleeding, and because it was near the optic nerve, usually resulted in life-long dry eye condition, and could potentially result in blindness. Needless to say, this surgery was so risky that it wasn't used often."

Clarifix was made available just over two years ago, and was initially performed mainly at medical universities. Clark began working with it at the University of Texas where he was doing his fellowship in NeuroRhinology.

"It's an in-office procedure, he said. "After applying a topical anesthetic, we insert a small balloon-coil catheter into the posterior nasal cavity and we cryo-ablate the posterior nasal nerves. This turns off the signals to the mucus glands, decreasing mucus production by about 80 percent, as well as the signals that cause the turbinates to swell. So it relieves both nasal drip and congestion.

"The only reported side effects include a mild nosebleed and an ice cream headache for an hour or two after the procedure. Studies have found a 74 percent decrease in symptom scores related to congestion and rhinorrhea. It's fairly remarkable how well it works and how low the side effect profile is.

"In addition to what we see with chronic rhinitis, there are many other things that can cause nasal obstruction. For example, we see patients with deviated septums. There are others who present with turbinates that are too large, which can block airflow. Thanks to the advances over the past decade with things like high resolution cameras and CT scans with intraoperative navigation, we have a number of tools for the broad spectrum of nasal conditions, giving us the ability to help more patients, which is gratifying."