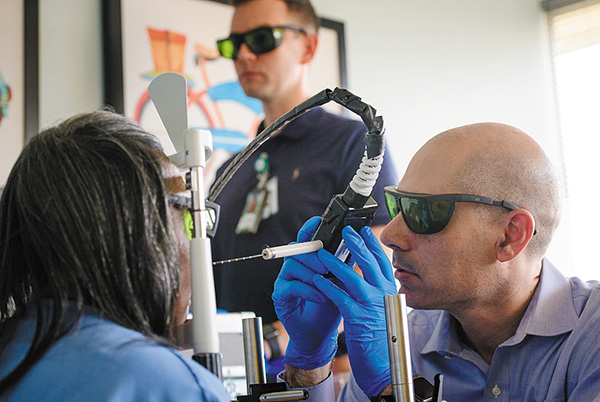 For the past decade, Steven M. Rowe, MD, director of the Gregory Fleming James Cystic Fibrosis Research Center and a professor of medicine at UAB, has been partnering with his collaborator at Harvard to develop a new, minimally invasive tool that enables physicians to view nasal airways at a cellular level.

"It's powerful because it's the only technology of its kind that can see cilia, the mucus and how bright and reflective it is," Rowe said. "We can see the mucus move, how fast it's moving, when it's stuck and when it's not. We can see inflammatory cells and measure how much inflammation is in the sinuses. And we can see how hydrated the airway surface is. That is a major aspect of the tool's underlying function. All of those properties can be seen at the same time with this device, and that allows us to really understand functional microanatomy of the airway."

Rowe and his co-principal investigator Guillermo Tearney, MD, PhD, an investigator for the department of pathology and Wellman Center for Photomedicine at Massachusetts General Hospital and professor of pathology at Harvard Medical School, recently published information about the tool in Science Translational Medicine.

The imaging catheter is small probe the size of a coffee stirrer. It is inserted into the nose about two to three centimeters and uses optical coherence tomography to look at the airway surface cells with a resolution of about one micrometer, a 50th the size of a human hair. The procedure requires no sedation and takes about 10 to 15 minutes to get four different views.

The imaging catheter is now being used in the research laboratory on patients. "We've done just under 100 cases of various diseases," Rowe said. "We've been limited so far to the sinuses, which are a window to the respiratory system for cystic fibrosis, and we think it can serve the same purpose in other respiratory diseases such as COPD, rare diseases of the cilia, and eventually things like asthma. We are just starting in those other disease areas."

Although it's a research tool now, Rowe and Tearney are working to put it into practice on a wider scale. "At Massachusetts General, they have been helping with the optics and computing, and here at UAB we conduct patients and help analyze and interpret the results," Rowe said.

He expects the tool will prove to have value for conditions beyond CF and ultimately be of interest to companies for development and broader use. "Once we've proved it's useful in a more common condition beyond CF, such as chronic sinus disease, this tool could be implemented clinically," he said. "It could be used to discriminate between severe and mild disease; patients who need chronic therapy versus those that don't; those who need surgery and those who don't; and those that have an underlying explanation because the mucus or cilia are abnormal. If we could show that kind of diagnostic utility, it would be a device that could be more broadly used."

Although Rowe is not actively seeking subjects from the community who do not yet have a diagnosis for the research work at this time, people with respiratory diseases caused by abnormal mucus who haven't otherwise been able to be diagnosed can be evaluated at a specialty clinic at UAB. "For people with respiratory disease and unexplained bronchiectasis, we have a specialty clinic directed by Dr. Martin Solomon, and we are happy to evaluate them," Rowe said. "We are working on treatments for abnormal mucus and will ultimately couple it with tools like this one to figure out if they are viable.

"The National Institutes of Health and the Cystic Fibrosis Foundation deserves credit for sponsoring this research. This is tax dollars and donations at work.

"We are proud of this tool. Answering the question of what's wrong with mucus has been plaguing researchers for several decades. We are happy to make our contribution."