Compact License Legislation Opens Alabama to Nurses from Other States 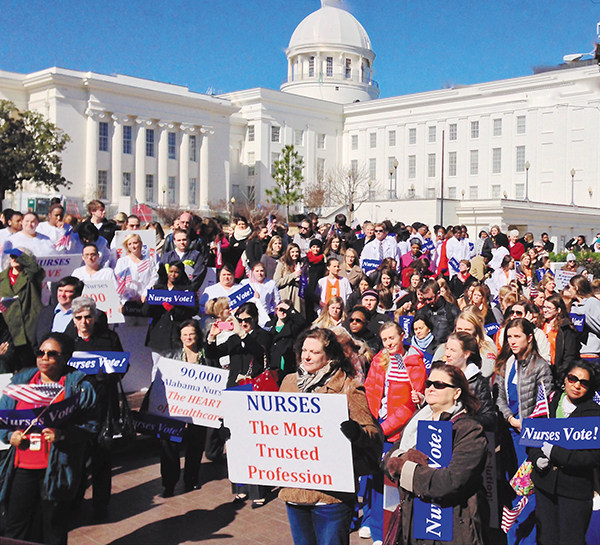 A large crowd turned out for Nurses Day at the Alabama state capital.

With a stated mission to promote excellence in nursing, the Alabama State Nurses Association (ASNA), seeks to affect policy and promote legislation that will benefit nurses. They achieved a big win in the last legislative session with the passage of the compact licensure bill, and they hope to ride that success into a developing campaign to pursue the opportunity for advanced practice nurses to practice to the full extent of their education and training.

"Compact licensure was enormous," said Sarah Wilkinson-Buchmann, DNP, RN, president of the ASNA. "It was a huge gain for nursing and for healthcare in our state. The ASNA fully supported compact licensure."

The compact license law enables nurses to obtain a license that allows them to practice in other states that are part of the compact. With the passage of the bill in the last legislative session, Alabama became the 32nd compact licensure state. The Board of Nursing is now in the process of implementing the law, with a target date of January 2020.

Once implemented, the law will require Alabama nurses to go through a process of fingerprints and background checks if they wish to obtain a compact license. And nurses from other states who have their compact license will be able to practice here.

"There are many reasons why compact licensure is a good thing for Alabama healthcare," Wilkinson-Buchmann said. "We can help fill the gap in rural areas with nurses who can come here from out of state. This will also be important for military spouses who are nurses. They move every few years, so they can practice from one compact state to the next without having to jump the hurdle of obtaining an Alabama license. In addition, previously in times of disaster, it was difficult for nurses to come into the state to assist. Now out of state nurses can come in to help."

State Representative April Weaver and Senator Greg Reed sponsored the bill. Weaver, who is also a nurse, said the compact license bill had the support of nurses around the state. "Last year, I saw nurses engaged at a level I have not seen in the 10 years I have served in the legislature," she said. "It was all due to the compact licensure bill. So many nurses in Alabama have multiple state licenses, and they were all excited to have the opportunity for Alabama to participate in the compact."

The ASNA hopes to translate the compact win into another accomplishment, as they begin working on behalf of advanced practice nurses. "We are forming a steering committee with a number of stakeholders to pursue the full scope of practice for advance practice nurses in Alabama," Wilkinson-Buchmann said. "Unfortunately, we are far behind other states regarding nurse practitioners' range of duties. If we can expand NP responsibilities, it will also help meet the healthcare needs of Alabama, especially rural areas where we have a shortage of providers. Currently the practitioner must have a collaborating physician, and that's difficult when you don't have physicians in the area to collaborate with.

She also pointed to the economic opportunities that such legislation would offer the state. "It would open up employment opportunities in rural areas, not only for the practitioners, but for the support staff as well. When you look at it from the bigger picture, it would be a boost to the local economy," she said.

Wilkinson-Buchmann has not set a timetable for this effort. They are contacting stakeholders for the steering committee and will move forward when the committee has reached consensus and feels they are ready to launch the campaign.

Photo 1: Nurses were engaged with state legislators in 2019

Photo 2: A large crowd turned out for Nurses Day at the Alabama state capital.