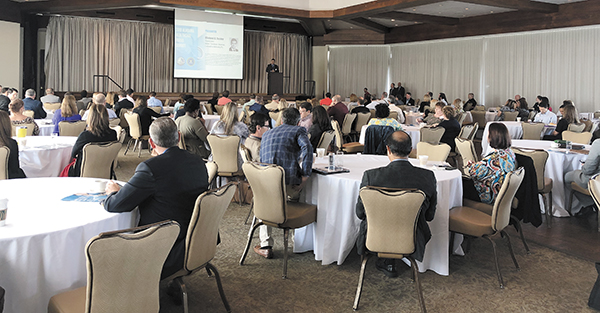 In September, the FBI, US Attorney's Office, BlueCross BlueShield of Alabama, and several local law firms participated in a full day educational summit focused on healthcare fraud. The summit was presented by the Birmingham InfraGard Members Alliance (IBMA) and the FBI, Birmingham Division, in partnership with Southern Medical Association, Kassouf & Co, and the Birmingham MGMA.

The summit, which was held at The Club, included seven sessions on topics including CMS and insurance fraud; opioid fraud and abuse; Qui Tam Whistleblower statutes; Stark Law and the perils of sub-lease agreements and kickbacks.

"Because of InfraGard's partnership with the FBI and our committee members' relationships in the local healthcare community, we saw an opportunity to create a unique event with Federal experts presenting the investigative and prosecutorial topics balanced by some of our area's top healthcare attorneys speaking on relevant legal topics," said Russ Dorsey, Manager of Information Services at Kassouf & Co and Vice-President of the InfraGard Birmingham Members Alliance. "We spent considerable time on the content, working with the speakers as a group to coordinate content across all the sessions.

"We also worked to insure this summit followed the InfraGard mission - to protect our Nation's critical infrastructure, in this case our Healthcare systems, through a public / private sector partnership based on information sharing and education. It is important that the content had real value and that the event was accessible to a large audience. Our team was able to get the full day's content approved for continuing education credits for physicians, lawyers, accountants and Alabama law enforcement."

The morning opened with comments by FBI Special Agent in Charge Johnnie Sharp, Jr. and Assistant US Attorney Lloyd Peeples. They were followed by Dan Harkness, FBI Supervisory Special Agent of the

FBI Healthcare Fraud Unit in Washington, DC, who spoke on the origins and history of healthcare fraud and current trends in Medicare and Opioid abuse. In the second half of his session, he showed Chasing the Dragon, a film that takes a compelling look at the human cost of opioid addiction, produced by the FBI. Attendees were given a copy of the DVD.

After lunch, Chinelo Diké-Minor, Assistant United States Attorney and the Health Care Fraud Coordinator for the Northern District of Alabama, spoke on fraud and abuse from her perspective as a Federal prosecutor. Brad Robertson, Partner at Bradley Arant Boult Cummings, followed with a session on Qui Tam and Whistleblowing statutes. Jim Sturdivant with Sirote & Permutt, spoke on criminal healthcare offenses from a defense attorney's perspective. Michael Tucker, with Baker Donaldson, spoke on sublease agreements, Stark law and anti-kickback statutes.

The afternoon concluded with a round table in which the four attorneys answered questions from the audience.