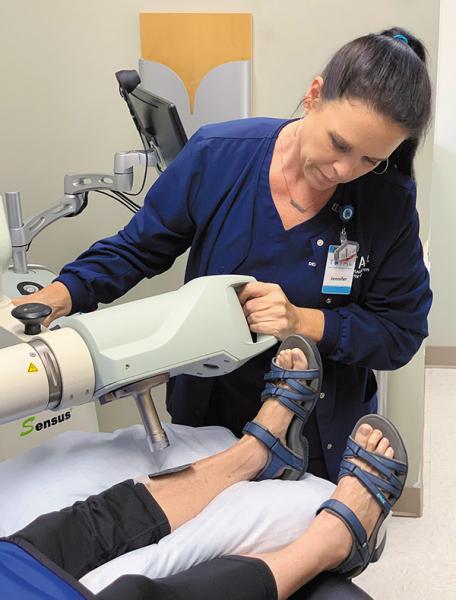 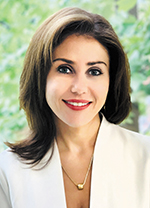 "Before this, patients' only option was surgery," says CEO Jennifer Cork with Total Skin & Beauty Dermatology Center. "Now if a patient doesn't want to have surgery again or has other issues that preclude surgery, the patient has SRT as an option."

SRT sends a low dose of radiation into the skin at a depth up to six millimeters and can be given in a dermatologist's office by a radiation therapist.

"SRT is an image guided treatment," says lead radiation therapist Jennifer Garrett, who administers the treatments at Total Skin & Beauty. "We use ultrasound to help us determine the depth of the lesion. Protocols then mandate the correct energy of radiation--50, 70 or 100 kilovolts--to deliver at different depths for maximum efficacy to ensure clear, non-cancerous margins around the lesion.

"It's a very low dose. You actually get more radiation exposure from a chest x-ray."

The level of kilovolts used depends on the depth the radiation needs to penetrate and the type of non-melanoma skin cancer. "Squamous cells are a little more aggressive so you have to treat it differently. It's the same with nodular basal cell," Garrett says. Nodular basal cell carcinoma comprises about 60 to 80 percent of non-melanoma skin cases and occurs most often on the head.

In the past year, Garrett has treated close to 100 patients. "The cure rate is 95-percent plus," she says. "A lot of these patients were Mohs candidates and didn't want to undergo surgery again. They've chosen the SRT route."

Mohs is the surgical option for treating skin cancers. It progressively removes thin layers of cancer-containing skin and examines them microscopically until only cancer-free tissue remains.

The other option for skin cancer radiation treatment is through hospitals and cancer treatment centers that currently utilize linear accelerators. Unlike SRT, these machines are built to deliver targeted, far more powerful radiation throughout the body.

With a linear accelerator, treatments for skin cancer are performed five times a week for the needed 20 treatments versus three times a week with SRT. "SRT allows you to keep the 95-percent cure rate, but with fewer treatments per week," Garrett says. "The radiation only reaches the depth of the skin, about six millimeters. 100 percent of the radiation goes to the skin. It's not affecting anything internally."

That low-dose of SRT also makes the treatment possible in dermatologists' offices, because it can be given by a radiation therapist versus a radiation oncologist. However, most dermatologists would not be able to afford the outlay for the needed equipment and access to medical experience.

With this in mind, Total Skin & Beauty decided to partner with SkinCure Oncology in order to bring the treatment modality to their practice. "By doing that, we have access to a radiation therapist and have a radiation oncologist on-hand as needed," Garrett says, along with equipment maintenance and calibration needs.

Garrett, who has been administering radiation therapy for 14 years, including with linear accelerators and now superficial radiation therapy, is on-lease to Total Skin & Beauty. She does weekly consultation calls with the oncologists at SkinCure. "It's like a tumor board at a hospital. We discuss cases to make sure we use the best approach, because every tumor is not the same," she says.

"Our radiation therapist is the liaison between SkinCure Oncology doctors and our dermatologists," Cork says. "Alone, it is extremely cost prohibitive to employ a radiation oncologist. But with this partnership, we have all that knowledge available to our patients and physicians."

Though Alabama's BlueCross does cover outpatient radiation therapy, it requires that it be administered by a radiation oncologist, limiting the treatment by default to hospitals and cancer centers. "I'm hopeful that BCBS will recognize this as a beneficial modality for non-melanoma skin cancer," Cork says.

The patients on commercial plans by BlueCross who come for SRT treatments have been paying the $6,000 to $9,000 cost themselves. "If there's a hardship, we work with the patient to process their hardship requests," Cork says. "Because it's a burden no one should have to bear when the treatment is covered in all the other markets."