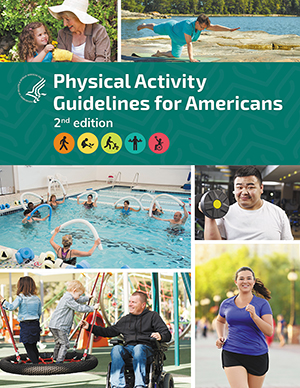 Calling all weekend warriors, runners, walkers, armchair athletes and especially couch potatoes - the updated Physical Activity Guidelines for Americans offer new findings that rethink some aspects of 'conventional wisdom' and focus on the preventive benefits of movement, noting even small changes can make a real difference in health.

The guidelines were released at the end of last year from the Office of Disease Prevention and Health Promotion (ODPHP), the department of Health and Human Services that acts as the gatekeeper for consumer health information (healthfinder.gov). ODPHP also serves as thought leader in health prevention and promotion through the publication of national guidelines and goals including Healthy People 2020 (healthypeople.gov).

Throughout this summer, the American College of Sports Medicine has published a collection of papers - ACSM Scientific Pronouncements: Physical Activity Guidelines for Americans, 2nd Ed. - in their scientific journal, along with informative blog posts on the ACSM site offering additional insights into recommendations outlined by the Physical Activity Guidelines Advisory Committee.

Kenneth Powell, MD, MPH, co-chair of the 2018 Physical Activity Guidelines Advisory Committee, sat down with Medical News to share some of the key highlights from the updated standards. Now retired, Powell was an epidemiologist with the CDC for 25 years in Atlanta and has focused on the intersection of physical activity and health throughout his career. He served on the 2008 advisory committee for the first edition of the national guidelines and discussed a number of advancements over the past decade that helped inform the 2018 advisory report.

"The benefits of physical activity haven't changed," Powell pointed out. "What has changed is our knowledge and awareness."

One of the biggest areas of discovery, he said, has been realizing the impact of physical activity on brain health. "Regular moderate to vigorous physical activity has an almost immediate demonstrable improvement in cognition," stated Powell.

He added improvements over the past decade in diagnostic tools analyzing brain activity helped show how regular physical activity reduces the risk of dementias, including Alzheimer's, and improves cognitive skills. "I think this is one of the biggest and most important areas for us to uncover," he added.

In 2008, the guidelines looked at physical activity from the standpoint of weight loss. The updated report focused on the preventive benefit of movement. "The 2018 report demonstrates very clearly that people who are more physically active ... who engage in moderate to vigorous physical activity ... have a reduced risk for becoming obese or gaining excess body weight."

While the newer guidelines shifted emphasis to prevention in many cases, Powell said there was also a focused effort to bring the immediate value of MPVA to the forefront. "This time, there's a much great emphasis on how physical activity makes people feel every day. They think better; they feel better; they sleep better; and they have more energy to conduct their daily activities," he noted.

"Back in 2008, there was not enough evidence for us to look at the health benefits for children three to five years," Powell said, adding the earlier guidelines did include information for those 6-18 years of age and adults. Now, however, Powell said there is enough available data to say children in this younger age group benefit from regular physical activity, too. While movement is often natural to younger children, Powell noted adults need to be cognizant of the health benefits of actually putting children in situations that encourage active play over sedentary pastimes.

"Also new in 2018 is evidence of the underlying benefits of regular physical activity for those who already have some type of chronic health condition," Powell continued.

Again, he noted, the focus in 2008 was more on physical activity as one part of a treatment plan for many chronic conditions, including type 2 diabetes, whereas the new guidelines were focused on what movement meant to the prevention of comorbid conditions and complications. For example, he said, the evidence points to MVPA lessening the risk of heart disease among diabetics, improving cognition for stroke patients, decreasing the risk of atherosclerosis among those with hypertension, and improving function and reducing pain for those with osteoarthritis.

Ultimately, Powell said the committee looked at about 15 common chronic conditions and found evidence of the preventive benefits of MPVA on all but one of the conditions ... where there simply wasn't enough evidence to make a determination one way or the other. "Our evidence strongly suggests that regular moderate to vigorous physical activity can be beneficial to practically everybody," Powell concluded.

Two of the biggest changes in the updated guidelines are how much and how long people have to move to realize any benefit from physical activity.

Powell said the new guidelines underscore an increased flexibility both in bouts of activity and in total time spent moving in a week. The preferred target of 150-300 minutes of MVPA remained the same. However, Powell noted, "What happens too often when people hear this range of 150-300 moderate to vigorous physical activity minutes, they think they have to get there to get any benefit. You don't have to get to 150 minutes in order to get some very important health benefits."

To hit the preferred target range, people engage in 10-15 MET - or metabolic equivalent of task - hours per week. Sitting perfectly still has no benefit in lowering all-cause mortality, but even getting 2.5 MET hours of activity in a week reduces mortality risk by about 20 percent. "You get a substantial reduction in your risk of dying by just adding five minutes a day of walking when you haven't been doing anything," Powell pointed out.

That isn't to say people shouldn't strive to hit the 150-300 minutes of MVPA. "We think for the whole population this target range is a good one to think about in general, but for individuals, there may be a different target," he continued. "For someone who has been doing nothing, adding anything really helps. That behavior should be reinforced."

Similarly, while most all of the focus is on MVPA, the committee found that even light intensity physical activity could be helpful. Those who sit the most and do the least have the highest risk for all-cause mortality. For those in the most sedentary group overall who sit at desks at work all day, Powell said risk decreases at least a little by simply standing up and moving around for just a few minutes during the day.

Bout length of exercise was another area that garnered a lot of attention. Powell noted conventional wisdom called for MVPA to be accumulated in bouts of at least 10 minutes. In that scenario, a five-minute walk didn't count. "We decided to revisit that for a couple of reasons," said Powell.

First, he explained, health recommendations were at odds. The 2008 guidelines called for 10-minute bouts but the Community Guide for Preventive Services recommended shorter actions like taking the stairs instead of an elevator or parking a little further away from the door. "It's not good to have public health recommendations that aren't consistent," he pointed out. The second issue, Powell continued, was an absence of information that proved bouts of less than 10 minutes weren't helpful.

While it's hard for people to remember a two-minute activity here and a five-minute one there, the use of accelerometers moved the science from self-reporting to data collection and showed people who accumulated 150-300 minutes of MVPA in shorter bursts did just as well as people who hit the target range with activities lasting 10 minutes or longer.

From the built environment and public policy to cognitive behavioral change and tracking technology, Powell said, "The evidence indicates there are many types of interventions that help people become more physically active." However, he continued, "To make big population changes, we're going to have to make many changes. They all help ... and they all help a little ... but none of them are going to be the single solution."

Still, Powell said the evidence has shown any physical activity confers some benefit. He added the healthcare community plays a key role in reinforcing that message and encouraging patients to take the first step toward becoming more active even if it's just a few minutes a day.