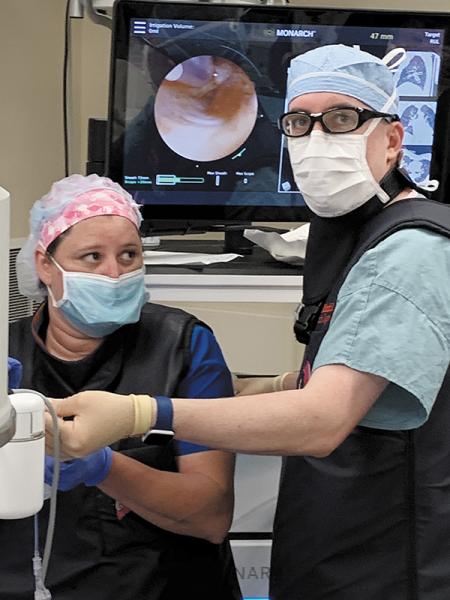 Princeton Baptist Medical Center is the first in Alabama and the 16th in the United States to use a new innovation that shows great potential for fighting lung cancer. The leading cause of cancer deaths worldwide, lung cancer kills more people every year than prostate, breast, and colon cancers combined.

Lung cancer is usually diagnosed late at a stage when treatment options are limited. Princeton was selected for the new technology because Douglas Minnich, MD, one of only three thoracic specific surgeons in Alabama, has been involved in complex bronchoscope interventions for the past 12 years.

He performed the first electromagnetic navigational bronchoscopy in the state of Alabama and has since developed one of the largest surgical experiences in the world with this technology.

Auris Health's Monarch™ Platform, the first FDA-cleared robotic platform for diagnostic and therapeutic bronchoscopy procedures, is designed with clinician ease-of-use in mind. It has a dedicated camera and instrument channel, allowing continuous vision without removal of the camera to pass instruments. The platform's design centers on a revolutionary, flexible endoscopic technology that promises to fight lung cancer by enabling physicians to diagnose hard-to-reach, small peripheral nodules earlier and with greater precision than ever before. Representing a serious advancement in minimally invasive techniques, the Monarch Platform enables physicians to access early stage lung cancer without incisions while the cancer can still be treated.

According to Auris, the integration of robotics, micro-instrumentation, endoscope design, sensing, and data science into one platform enables new categories of care and maintains the integrity of the human body.

"The device is an extension of the previous methods of navigating to a nodule in the lung," Minnich says. "It is a robotic console that attaches robotic arms which control the device. The bronchoscope is one of the robotic arms and, with the controller, is able to navigate through the airway to the nodule for biopsy or for further intervention. Although it is robotic, there is still a human component to the planning and performance of the procedure. The machine provides a precise method under the direction of the person performing the procedure to access small nodules in the lung. The Monarch is an amazing piece of equipment that holds tremendous promise for detecting lung cancer in earlier stages."

The device also provides the opportunity for the surgeon to access lung nodules under direct vision, even out to the edges of the lung. "We haven't been able to do this previously, because the technology did not allow direct vision. This platform has a dedicated camera and instrument channel that allow continuous vision throughout the procedure to aid in the biopsy process. All of the preceding technologies relied on a virtual image for guidance," Minnich says.

According to Auris Health, early data from 24 human patients in the BENEFIT study included no significant adverse events. The primary effectiveness endpoint is successful localization of targeted pulmonary lesions confirmed by using a radial endobronchial ultrasound probe. The endpoint was reached in 92 percent of cases. "Being able to access the periphery of the lung with direct vision is the key component," Minnich says.

There are other applications in development for the Monarch platform. Auris Health plans to expand the platform to other treatment areas in the future, including urology applications for kidney stones and, ultimately, a gastrointestinal application for the esophagus and colon.

"We are proud of that Alabama is one of the early states to get access to Monarch™ Platform," Minnich says. "We are trying to get the word out, because it isn't a common technology yet it has the ability to help a lot of patients."