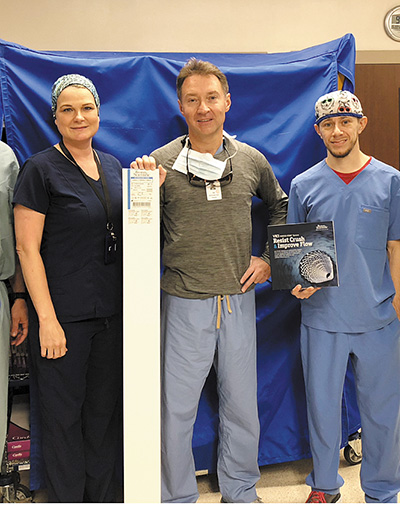 Venous obstructive disease affects about 40 percent of the U.S. population. It is caused by conditions such as deep vein thrombosis, post-thrombotic syndrome and compressive diseases such as May-Thurner syndrome. A new treatment, the Vici Venous Stent™ system, received approval from the FDA earlier this year for treatment of these conditions.

Jan Skowronski, MD, an interventional cardiologist with Cardiovascular Associates at Brookwood Baptist Medical Center, has used the new system and is pleased with the results. He performed the first case with the Vici stent in Alabama. "Venous disease has been under-recognized for years, and the diagnosis is often missed. Women make up 80 percent of the cases," he says.

In venous obstructive disease, there is an impingement of the left common iliac vein by the right common iliac artery. It causes left lower extremity pain, swelling, and deep venous thrombosis. In treatment for patients with venous obstruction, it is imperative that the operator restores and maintains vessel patency to ensure the return of blood flow to the heart.

"This condition has been more widely recognized over the past few years, and we now have an effective treatment with the Vici stent system," Skowronski says. "The stents we used in the past were bulky. The procedure requires repair to the iliac artery and the positioning of the stent into the interior vena cava. Unfortunately, the deployment of this procedure was not precise with the prior system."

According to the developer, Boston Scientific, the Vici Venous Stent™ system is a self-expanding nitinol stent designed specifically to meet the challenges of venous anatomy. Its unique closed-cell geometry and high radial strength provide excellent lumen quality without compromising flexibility or deployment accuracy. Because the stent is positioned in a place where physical forces put significant external pressure on the vessel, the Vici stent is engineered to be crush resistant. It also features a tightly interlaced network of struts that keep the interior open to allow for blood flow. Interventionists can expect reliable performance and more successful patient outcomes from this product.

"The Vici system is user-friendly for the operator, safer for the patient, and it reduces the length of the procedure. And with skillful physicians, the process is much simpler. This new system also allows for precise positioning of a stent and an easy determination of the specific treatment zone," Skowronski says. "With the previous generation of stents, we weren't sure how they would look at the end of the procedure. Sometimes, those stents would be elongated or too short. With the Vici system, we don't have to cover the inferior vena cava. We can position the stent precisely at the venous bifurcation."

Approval of the Vici stent was based on data from the VIRTUS study, a prospective, multi-center study. The 12-month trial demonstrated that patients who were treated with the Vici Venous Stent™ system for iliac and femoral vein obstructions exhibited a high rate of patent, or open, target lesions. It also evaluated the Vici stent in patients with clinically significant obstructions in the iliofemoral venous outflow tract, resulting from post-thrombotic syndrome or compressive diseases such as May-Thurner syndrome. And the study evaluated the stent in relation to pre-defined objective performance goals in patients with clinically significant obstruction in the iliofemoral venous outflow tract. It successfully met the primary safety and effectiveness endpoints.

"The clinical trial found that, across the population, this stent shows good patency and a low rate of recurrence of venous thrombosis," Skowronski says. "That means very few patients who receive the stent have recurrence of blood clots in the vein, so it is an effective treatment."

Skowronski believes in early adoption of life-saving technologies. In July, he and members of his CVA team performed a live site demonstration for a national endovascular conference. Skowronski transmitted live difficult cases from Brookwood Baptist Medical Center to the conference site in Chicago.

"Because we do a lot of device research at CVA, we are recognized as a vascular center and have a good relationship with the industry," Skowronski says. "We have a high-level endovascular program for both blocked arteries and veins, and we have a number of specialists who are proficient and are involved in clinical trials. As a result, we believe that we are doing a good job for the Alabama population and those who come to us from out of state."