The Enigma of Rett Syndrome 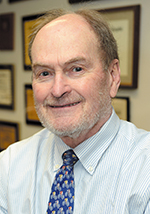 A baby girl is born, beautiful and seemingly healthy, with the promise of a bright future ahead of her. Then, out of nowhere, the progress she has made in verbal and motor skills begins to regress. Interaction may become more difficult, with less eye contact than before.

By the time the repetitive hand motions begin, she may have been misdiagnosed with autism when in fact her neurological system is under attack by a devastating genetic disorder that has only been known in the United States since 1983--Rett Syndrome.

That was also the year that internationally recognized Rett researcher Alan Percy, MD saw his first case at Baylor. Now a pediatric neurologist at Children's of Alabama and UAB, Percy's research has focused on understanding how this unique disorder develops, looking for ways to counter its effects, and ultimately, finding a therapy to defeat it.

"When the first English translation of a Swedish article appeared, we learned that when this disorder appears, the patient is almost always a female between the ages of six months and two and a half years," Percy said. "It was originally described in Vienna in the 1950s by Dr. Andreas Rett, an Austrian pediatrician who noticed the unusual hand movements of patients in his office.

"My first reaction when I heard about the disorder was similar to the reaction of the Austrian medical community when Rett tried to call attention to it. Half weren't sure they believed it and the other half said they had never seen it. Then we had a patient with the same symptoms. Since almost all the cases reported were girls, that was a strong clue that a genetic problem was involved. A colleague at Baylor found the mutation on the X chromosome in 1999."

It was in MECP2, a gene that regulates the transcription of other genes involved in neurological development. It tends to occur more often on the X chromosome contributed by the father. This is why it is almost always seen in girls, since fathers contribute Y chromosomes to sons. The rare exceptions are usually either XXY situations or a mutation of a different gene with a similar function. Very rarely, a woman may have a very low expression of the gene and could give birth to either a daughter or a son with the mutation.

"Since women have two X chromosomes, the severity of symptoms can vary depending on whether more of the normal or mutated X chromosomes are expressed in the body's cells," Percy said.

It is important to get an early and accurate diagnosis so that as much as possible can be done to cope with symptoms and help families prepare for the challenges. Since awareness of Rett syndrome is limited, getting an early diagnosis can be difficult.

"Most cases are diagnosed by specialists," Percy said. "Only around five percent are diagnosed by pediatricians. However, pediatricians can use a simple technique to detect an early warning. Measure and keep a record of the growth of the baby's head. Starting as early as within a couple of months of birth, the rate of growth in the circumference of the skull may begin to slow down. As the condition progresses over a year or two, the baby's head is noticeably smaller than average.

"Another common story we hear from parents is that in early infancy, their child was a very good baby, who tended to be quiet, not fussy, and basically just ate and slept. Then, as the syndrome develops, the screaming begins, with the baby crying and screaming day after day for no known reason. Then the crying stops.

"In addition to cognitive effects, the disorder may delay walking and cause an unusual wandering gait with the feet farther apart. The most obvious symptom is unusual hand movements at the midline. Clapping, wringing or flapping the hands can be nearly constant during waking hours. The effects of the condition also limit life span. Current life expectancy has risen to around 52 years."

Since symptoms arise from the lack of genetic signaling to stimulate other genes to produce the chemistry necessary for neurological development, researchers are looking for ways to supplement the missing chemicals.

"We have clinical trials underway and one stage three trial ready to go," Percy said. "One of our associates is working on a surrogate to mimic BDNF that can pass through the blood brain barrier. While these medications could improve symptoms, what we ultimately need is a gene therapy that can replace the mutation with a healthy gene.

"We are talking with a Chicago-based company that is very close. AveXis has a gene that looks good, and we're hoping that within two to three years a delivery system will be ready.

"With any intervention, especially gene therapy, the sooner we can begin treatment, the better the outcome is likely to be. That's why we're working so hard to build awareness among primary care physicians and pediatricians who would be in a position to detect symptoms early."

To learn more about Rett Syndrome, go to Rettsyndrome.org or Rett Syndrome Research Trust at ReverseRett.org. A local resource, SukiFoundation.org is holding an August fundraiser. Details are available on the website.