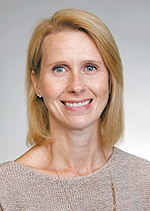 As soon as a woman announces that she's pregnant, she begins getting advice. Someone usually tells her to avoid changing litter boxes so she doesn't get toxoplasmosis. However, it's unlikely that anyone - maybe not even her doctor - will warn her of a more common threat: a cytomegalovirus infection. In fact, a recent study found that awareness of Cytomegalovirus (CMV) is as low as 85 to 90 percent in the at-risk population.

Children's of Alabama and the UAB Division of Pediatric Infectious Diseases are recognized worldwide for their research into understanding this virus, combating its effects, and ultimately developing a way to prevent infection.

"The greatest threat of congenital CMV infection is hearing loss and deafness, but in some cases there can also be learning disabilities, cerebral palsy and eye disorders," Shannon Ross, MD, said. The UAB associate professor is clinical director of the pediatric infectious disease program and co-medical director of the Children's of Alabama Stewardship Program. Her current research is looking for markers to help determine which babies born with congenital CMV, without symptoms at birth, will later develop hearing loss.

"We presently use antivirals only in babies showing symptoms, but if we knew which children would be affected later, we could begin antivirals and possibly head off some of the damage," she said. "For now, children born with CMV should have their hearing checked often for the first five years."

Because as of now there is no way to treat pregnant women who get a CMV infection or prevent the transmission of the virus to the fetus, guidelines do not usually suggest mentioning the topic to pregnant women. However, some advocates point out that knowing about the virus and the most common ways it is transmitted could help prevent it.

"A scenario we see too often is a pregnant woman who is caring for a toddler who picked up the virus in day care or a play group. The virus is transmitted through saliva and urine," Ross said. "Pregnant women should be vigilant about not sharing food or eating utensils, and washing their hands very well after changing diapers."

Unfortunately, baby kisses should be away from the mouth and cheeks, and no matter how rushed, women should never give in to the temptation to use their mouth as a third hand to carry anything a child has touched.

"The greatest risk of passing the virus on to a fetus occurs in women infected by CMV for the first time," Ross said. "Women who test positive for the virus can be infected by a different strain. Though the risk of passing it on seems low, the severity of its effects depends on other factors.

"Current thinking is that an infection that occurs early in pregnancy, in the first or second trimester, is more likely to cause more serious effects. At birth, most babies with congenital CMV appear normal. To identify those who are infected and at risk of developing hearing loss and other symptoms later, babies have to be tested within the first three weeks. Although the virus can make babies who acquire it after birth very sick, especially preemies and those who are underweight, infections after a baby is born don't have the same long term risks as those that occur before birth."

Children's researchers were also involved in determining the best approach to a screening test of infants at birth.

"Blood tests didn't work well, since the virus isn't sufficiently concentrated in the blood," Ross said. "Urine and saliva were better targets. Collecting urine for screening in newborns is difficult and time consuming, so a cheek swab to test saliva was more practical for mass screening. Our researchers developed a saliva test that is highly sensitive and specific."

Screening adults for CMV isn't typically done except when making a blood donation. Most adults eventually test positive for the virus. Those who test negative are highly sought after for donation of blood to be used in sick infants, transplant patients and those with immune disorders like HIV.

Healthy adults who are infected may not even seem sick, or may just feel a little under the weather for a few days. However, some develop symptoms that can feel a lot like mononucleosis.

"A lot of work is going on now to develop a vaccine," Ross said. "The challenge is that there are so many strains. However, if we keep working at it, eventually we will make it happen. The day will come when we will be able to help prevent CMV."