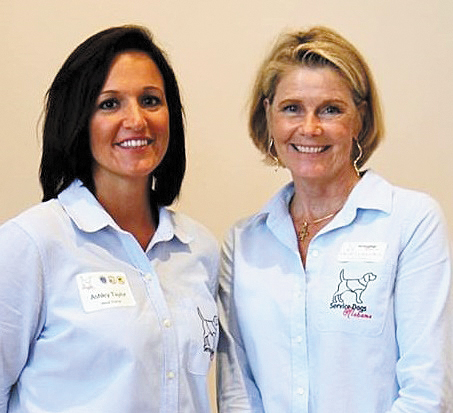 Not Just another Furry Face

Service animals today do much more than guide the blind. They can hear fire alarms for the deaf; alert diabetics to blood sugar problems; steady people who have difficulty walking and help them up if they fall; pull wheelchairs up ramps; and bring help, phones and medication to people with seizures, asthma and serious allergies. They can also calm panic attacks, PTSD episodes, and open up the world to children with autism--plus so much more.

"People don't realize what a difference in independence having a service dog can make in being able to go out and do the things you need to do," Nicole Wilson of Birmingham said. "When I developed neurological problems and had difficulty walking, my German Shepherd Eros was always there to steady me. If I fell, he stood next to me and let me brace against him to help me get up. I live alone, but I felt safer knowing he was there."

Thousands of people in Alabama could benefit from having a service animal. The difficulty is that with only one major service dog training facility in the state, it is hard fill the need for people who require the assistance of a trained service dog that has passed the public access test and can accompany their owners in public spaces. Each year, Service Dogs Alabama in Mobile selects 50 puppies to enter training, but not every dog has the focus and temperament to graduate.

The shortage of certified service animals is complicated by confusion about the differences in legal protections, as well as training and task capabilities between service animals, therapy animals and emotional support animals.

A service animal is not a pet in a mail order vest that someone wants to take on a plane or into a restaurant. Under the Americans with Disabilities Act (ADA), those legal protections are granted only to highly trained animals that have passed certification and are present to perform a task for someone who has a qualifying disability.

"Service animals are trained to focus only on their handler. They have to be able to ignore other people and animals and keep their attention on recognizing their handler's needs and performing tasks to help," Frances McGowin of Service Dogs Alabama said. "They have a very different temperament and skill set than therapy dogs that can be everybody's friend when they go into hospitals and nursing homes."

Therapy dogs can be beneficial to people who are experiencing depression, isolation or who simply need the comfort of a companion. They are trained to interact safely with the other people and behave well in public. They don't come under the same ADA exceptions on where they can go, but they are often invited into spaces where they can be helpful.

Emotional Support animals can be pets that bring their owners emotional support, but do not have the training of a service animal. They do not qualify for ADA exceptions on where they can go. They may qualify for some rental housing and transportation exemptions under other regulations depending on the circumstances.

In addition to dogs, miniature horses, cats, pigs and even birds have been trained to assist people with specific types of disabilities. Some of the early research into what the keen senses and intelligence of animals are capable of achieving was conducted by Auburn University's School of Veterinary Medicine under the leadership of Larry Myers.

"We studied primarily dogs because of their sense of smell and training potential," Myers said. "We briefly tried working with ferrets, but they had a tendency to bite.

"For military and law enforcement working dogs, German Shepherds from Belgian and East German lines are popular. In addition to being good at detecting explosives and searching for survivors and lost people, they also tend to be very protective of their handlers.

"We found that abilities like an unusually strong sense of smell varied not by just breed, but also by line. For example, beagles from household pet lines tended to be friendly, but had only an average sense of smell, whereas those from hunting lines had a much stronger sense of smell.

Deciding which dog is the best choice depends on matching the task to both inborn abilities and traits of temperament that affect behavior.

When Nicole Wilson began training a puppy to replace her retiring service dog, she ran into the difficulty of predicting how a dog's personality would develop as it grows. Before becoming ill, she and her other dog had competed in a sport for highly trained German Shepherds and they volunteered as a rescue team to search for survivors. He was already well on his way toward becoming the service dog she needed. She chose the new dog as a puppy and had to start training from the beginning.

"She's a big help at home, but she is playful and I can't rely on her to stay with me in public if something interesting comes along. It's very limiting not having a dog I can take out in public, and it can take a long time to find another dog." Wilson said.

So what type of dogs do professional service dog trainers choose?

"We train mostly labs and lab mixes from a line we've had success with before," McGowin said. "They are intelligent, calm and able to focus, which is a different combination than other types of working dogs that may do tasks related to protection or tracking."

Ashley Taylor, cofounder and head trainer of Service Dogs Alabama, oversees the specialized task training. It can take from six months to two years to teach dogs to perform the tasks needed, depending on the complexity of assistance they will provide.

With training every day for such a long period, costs for a service dogs can vary from $12,000 to $20,000 and up to $30,000, depending on the amount of time required. As a charitable organization, Service Dogs Alabama typically covers half the cost, and some of their clients are veterans who may qualify for VA benefits.

"We wouldn't deny anyone a dog due to inability to pay, but we do encourage families to participate in fund raisers so there will be resources to train the next dog to help another person," McGowin said.

In addition to service tasks, there may be another intriguing ability that dogs might someday put to use to help human patients. One research project Myers participated in investigated whether dogs could detect diseases by smell. There has long been speculation that dogs might be able to smell conditions like tuberculosis and cancer.

"There is a definite basis for an ability to detect low blood sugar by scent. We were investigating whether it might also be true of cancer," Myers said. "At over 80 percent positive, the results seemed too high to believe. We went back over video of the testing and realized that these smart animals might be picking up on unconscious body language from the trainers. If funding were available, it would be interesting to see what would happen if we could set up a trial where not even trainers knew which sample was correct."