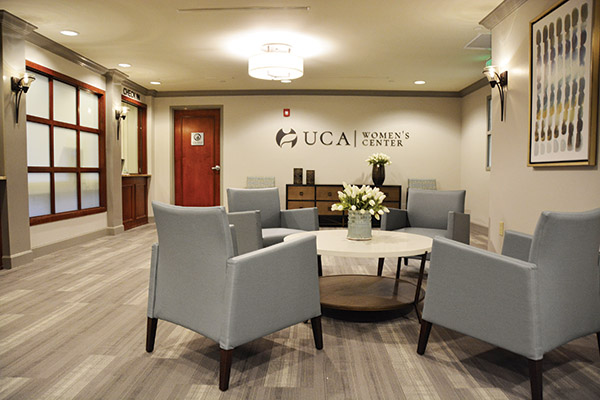 The lobby of the UCA Women's Center.

Mention urology, and people tend to think of men with prostate problems or kidney stones, and the mostly male physicians who care for them.

However, urology issues are very much a concern for women, from recurrent UTIs to stress incontinence after having children to urge incontinence in later years. In spite of the negative impact these difficulties have on daily life, women can sometimes be a reluctance to bring up these issues with their primary physician. Uncertainties about what a urology visit might be like can add to delays in seeking care.

"With so many women from the baby boom generation entering a time in their lives when these issues tend to be more common, we recognized the growing need for a place that can provide care in a setting that puts women at ease, and with comprehensive services focused on the urological health of women," Urology Centers of Alabama CEO Jason Biddy said.

"Last fall we opened UCA Women's Center in its own separate location on Independence Drive a short distance from our other Homewood office. Starting with design, layout and furnishings, we created an environment with women in mind. The physicians, nurse practitioner and staff are also all women, which can help some women feel more at ease when they need to see a urologist."

Urologist and urogynecologist Nicole Massie, MD, said, "It's a relaxed setting, and the layout is open which helps women feel free to stop by on the way out if they have a question they want to ask their doctor or the staff. Another helpful aspect is that in one location they have access to such a broad range of services. We have partnered with a physical therapy group that can help with issues like strengthening the pelvic floor. If the need arises, women can consult with a sex therapist on site.

"There is so much more we can do these days that can really improve women's' quality of life, whether they are dealing with recurrent UTIs or issues that arose from childbearing or aging. In many cases, we can achieve considerable improvement with conservative treatment. In more complex cases that may require surgery, such as serious prolapse, pelvic reconstruction or malignancy, we can offer state of the art surgical treatment, including robotically assisted surgery when indicated."

Urologist Paula Rookis, MD, cares for patients at the Women's Center and both women and men at other UCA locations.

"The primary differences we see in the urology needs of women and men relate to the effects of childbearing and hormonal changes, but both men and women have some issues in common, such as kidney stones, infections and malignancies," Rookis said. "While men may have difficulties related to the prostate, women often come to us for help with incontinence or overactive bladder. These can have a serious impact on a woman's social and work life.

"Stress incontinence, which may be brought on by sneezing or laughing, is often a lingering effect of the loosening of pelvic structures during pregnancy and delivery. There are multiple options we can offer to improve the situation. Urge incontinence tends to be more common as we age, and it may be worse with a lot of caffeine, soft drinks and acidic beverages. Overactive bladder can also diminish the quality of life for women and it can also leave them exhausted after having to get up repeatedly during the night.

"When women report having to go to the bathroom often or a large volume of urine at night, there are also cases where we have to consider the possibility of sleep apnea, which can be misread by the body as heart failure, triggering the removal of extra water. When this issue or a heart problem may be involved, we follow up to get to the source of the problem.

Ali Parden, MD is the third urologist on the team, and nurse practitioner Alyssa Long, RN handles specialized procedures and can often help with problems that may not be serious but are urgently in need of same-day attention, such as an acute bladder infection.

"Our female patients have been enthusiastic in their response to the Women's Center," Biddy said. "We had one patient who was so happy to have her bladder infection taken care of the same day that she told all the women in her office about us. We get a lot of referrals from women telling women that this is the place to go."