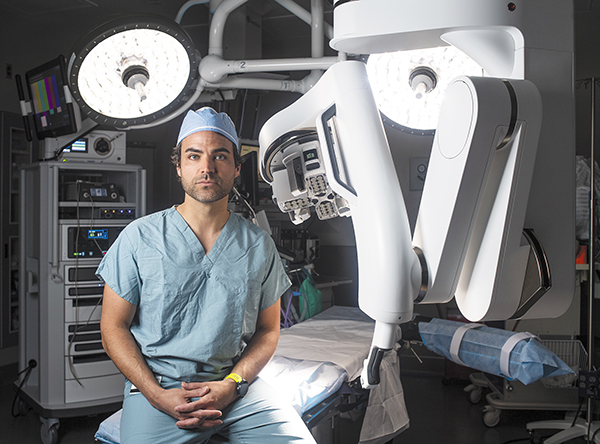 One of Only Two in the Southeast

The University of Alabama at Birmingham recently acquired a new da Vinci SP® Single Port Surgical System, approved by the FDA for urological procedures. UAB is the only institution in Alabama and one of only two in the southeast with this innovative, state-of-the-art technology.

Jeffrey Nix, MD, FACS, director of Clinical Service Line GU Oncology and director of Robotic Surgery at UAB, completed the first surgery using the single port robot with his team in January. Since then over 20 procedures have been performed, and so far, Nix is pleased with the results.

The robot has an arm containing multiple tools that can be used to perform prostatectomy, partial nephrectomy, and pyeloplasty. "All of these tools can come through a single incision and then be independent and mobile, just like hands, wrists and elbows as extensions of your arms," Nix said. "Now we can do complex operations through one small incision."

Nix believes this is the next logical step in developing less invasive surgical procedures. "This morning, I took out a patient's prostate," he said. "Normally when I do it robotically or laparoscopically, we have to make four or five little incisions. But today, I was able to do this surgery deep in the pelvis with wristed motion and do it through one incision of about an inch. It was almost not big enough to get the prostate out."

"The big benefit of the procedure is how quickly we can get the patient recovered and convalesced," Nix said. "This is an operation that used to take several days in the hospital, and then with the advent of robotics, it improved to just one day in the hospital. Now it's outpatient."

There are other advantages as well. "In addition to seeing patients go home the same day, we see patients getting back to work quicker with less pain," Nix said. "We are writing fewer pain prescriptions and for a fewer number of pills."

Besides Nix, three other UAB surgeons are using the single port robot: Patrick Selph, MD, urologist; John Porterfield, MD, general surgery; and Kenny Kim, MD, gynecology oncology. Others are being trained. Within the next six months, UAB will probably have ten surgeons using it.

While the FDA has approved the robot only for urological procedures, off-label uses are permitted as long as the patient gives informed consent, and UAB has also used it for adrenalectomy, simple prostatectomy, hysterectomy, distal ureterectomy and single site cholecystectomy.

Nix referred to a recent FDA safety communication concerning robotic surgery, which read, in part, "The FDA has not granted marketing authorization for any robotically-assisted surgical devices for use in mastectomy or for the treatment or prevention of cancer. However, the FDA is aware of scientific literature and media publications reporting poor outcomes for patients, including one limited report that describes a potentially lower rate of long-term survival when surgeons and hospital systems use robotically-assisted surgical devices instead of traditional surgery for hysterectomy in cases of cervical cancer. In addition, the FDA has received a small number of medical device reports of patient injury when these devices are used in cancer-related procedures."

Despite the warning, Nix believes single port robotic surgery represents the future of minimally invasive surgery. "The robot is a tool, and we know what the tool can do," Nix said, "We are using it in situations that are appropriate. We are being careful to over-perform and undersell, and we're very cautious in our consent process to present what it is. In the right situation, it can be incredibly valuable for patients in terms of quality of care. This is the most advanced platform in minimally invasive surgery, and at UAB we are trying to keep at the leading edge of the curve."

Nix has been involved with the development of the single port robot as a stakeholder for several years, providing feedback on prototypes, so he was in a position to use the technology early after it was available. He and his colleagues participated in training on cadavers before using the device on an actual patient. And while he has found it to be all he expected, he doesn't anticipate other institutions coming on board quickly.

"You are probably not going to see this pervade the U.S. as quickly as the other units have," he said. "You see the old-school multi-port robots all over the place. You probably won't see hospitals jump as fast at the single-port. There's a big learning curve, and it's a big enough leap that I don't think you'll see the adoption as quick. I expect referrals will increase, but you will still see multi-port surgeries. It takes some time to adapt."

In the meantime, Nix encourages physicians to view a video at www.youtube.com/watch?v=-jm63JdTrp4 to understand the single port robot better. "If you can see the 20-second video, you will understand it, and see right away why this is revolutionary," he said.