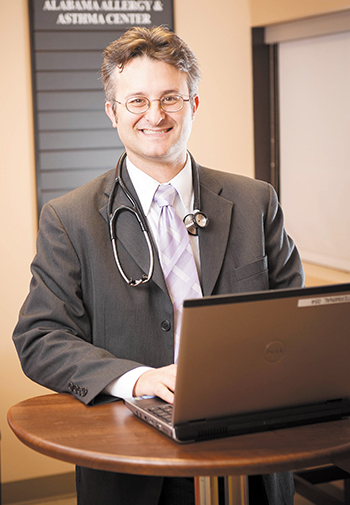 "Each rising generation is appearing to be more allergic than the next," says John Anderson, MD, an allergist with Alabama Allergy. Between 1997 and 2011, the prevalence of food allergies in children rose by 50 percent, equaling about two in every classroom, according to the Centers for Disease Control (CDC).

Allergies first begin at birth, but symptoms start most often with atopic dermatitis, also called eczema, at around six months to a year. "That doesn't mean all allergies start then. It can start later," Anderson says. "But atopic dermatitis is historically looked at as the entryway to that allergic march -- that pattern where kids start with eczema and then later have allergy asthma and allergic rhinitis."

When researchers first looked at the allergic march, food allergies were not part of that picture. But now the combination of eczema and food allergies is seen as a predisposition to allergic rhinitis and asthma later. "Not all kids showing those symptoms will have respiratory conditions later," Anderson says. "But if you're looking for predictors, early onset and severity of atopic dermatitis and food allergies, if they are a persisting problem, are clues that a child will grow into other disease states."

Often the eczema and food allergies will fade in late childhood at around 10 to 14 years of age. "We think that the role of the skin as a barrier might have something to do with the initial allergic reactions," Anderson says, which is why some kids' symptoms fade and do not progress along the allergic march.

Before a child ever orally contacts a food, their skin may come in contact with it. "That touching is an opportunity for the immune system to survey what's around it and the start of either becoming allergic to it or tolerant," Anderson says.

Studies on peanut allergies in children--the most common food to trigger anaphylaxis, a potentially fatal allergic reaction -- have shown that the white blood cells that govern the allergic reactions, called lymphocytes, displayed markers proving they had been on the skin. "That showed that the skin had touched a protein of peanut and that the skin was the point of initial exposure to the allergen for those children," Anderson says.

"This was the great folly of our allergy experiment," Anderson says. "We told parents not to give peanut butter to kids until they were three years old, because we did not think at that time that cutaneous sensitization was a cause."

Now allergists believe oral ingestion lessens the risk of a reaction and breaks that allergic march, at least for peanut. "One reason for this is the immune system that traffics through the gut and the mouth is perhaps more engineered for creating tolerance to food," Anderson says.

The five-year LEAP study, that ended in 2013, tested the early oral introduction theory by intentionally feeding peanut for over a year to 500 infants ages 6 months to a year prone to allergic risk factors, like eczema. "It showed that early introduction prevented the development of peanut allergy," Anderson says. Five years later, 81 percent fewer of those children had manifested a peanut allergy compared to the control group, which had avoided peanuts completely during that time.

Today, allergists suggest parents of infants showing no allergic risk factors regularly introduce peanut butter at home. But if they show a history of eczema or egg allergy, then they should talk to their doctor and decide if an allergist should be part of the conversation.

"As groundbreaking as this is, it hasn't changed the allergic march. Kids are still getting other food allergies, atopic dermatitis and asthma down the line," Anderson says. "We're still searching for more meaningful interventions to change the course entirely. And there are things coming down the pipeline that could that."

One option is the current development and usage of biologics -- drugs tailored to the individual that block specific signals that normally trigger allergic reactions. "Those could then be used to halt or alter this atopic path," Anderson says, along with other options being explored, such as probiotics and introducing the most common allergic foods in infancy -- cow's milk, wheat, and soy.

"We know small studies show just applying moisturizer to a child's skin helps to prevent atopic dermatitis. How simple is that?" Anderson says. "This is something that could have broad implications and needs more study."

Anderson says the microbiome of all the germs around us needs to be better understood, because the common cluster of symptoms in the allergic march -- atopic dermatitis, food allergy asthma, and allergic rhinitis -- are occurring in more numbers than genetics can explain. "The microbiome has been altered by our lifestyle changes, and we need to learn more about what has changed," he says. "Then we can intervene in our microbiome to restore our tolerant nature to the proteins within our food and our environment. That's in its early stages."