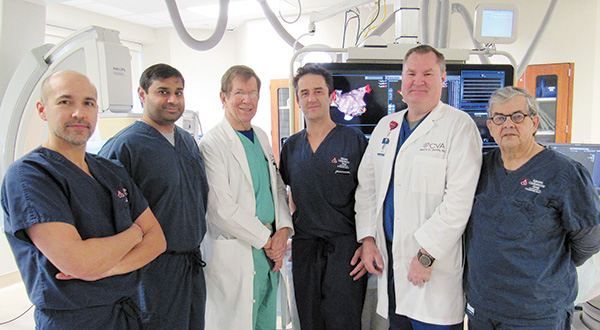 When Grandview Medical Center opened its doors in 2015, their new electrophysiology program began with one lab. "We had a vision to build up the lab and create growth based on quality components," says Jose Osorio, MD, a cardiac electrophysiologist (EP) and the medical director of the Electrophysiologist Lab at Grandview. "We have a lot of quality improvement meetings."

To stay on target, the EP team focused on measuring outcomes and analyzing data. They also participated in a myriad of research to stay up on the latest breakthroughs and devices. "This allowed us to be successful and referrals continued to grow," Osorio says. That generated the need for more labs, and the hospital responded. A few months after the first lab opened, they had a second lab running. Five months after that one, they opened a third. Now, after only three years, Grandview's EP program keeps four labs bustling daily.

"We do about 1,500 ablations a year--900 are for atrial fibrillation ablations and over 200 ablations are for ventricular arrhythmias. And we do about 120 to 150 left atrial appendage (LAA) closures," Osorio says. Device implantations totaled about 2,500, including defibrillator implants, pacemaker implants, and loop recorder implants. The lab volume increased over 19 percent in 2018 compared to 2017.

Grandview's EP Lab also became only one of four in the country--and the first in the Southeast--to attain Cardiac Electrophysiology Accreditation under the Intersocietal Accreditation Commission.

A targeted triumph of the ablation aspect of the EP program has been to reduce the use of fluoroscopy--a radioactive component--in their atrial fibrillation procedures. "We have performed almost 4,000 ablations without fluoroscopy," Osorio says. "Hundreds of electrophysiologists and staff members from all over the country have visited our institution to learn these techniques."

The left atrial appendage (LAA) closure that Osorio performs reduces the risk of stroke from blood clots caused by the inefficient beating of an AFib heart. It is most commonly performed on patients unable to take the traditional treatment of blood thinners. "A lot of patients cannot take thinners because of contraindications, leaving them unprotected," Osorio says. "The LAA closure is designed for these patients."

The 30 to 60-minute procedure walls off the blood pooled inside a little pouch, called the appendage, inside the atria. That blood can clot, dislodge and cause life-altering or fatal strokes.

The LAA closure dams up that pouch. The procedure starts by threading a tiny device through the major blood vessel in the groin up to the heart. "It looks like a little umbrella. We open that in the mouth of the appendage and leave it there," Osorio says. Within a few weeks, the heart tissue grows over the umbrella and completely occludes the opening.

The thousands of procedures by Grandview's EP lab reflect the area's need. "Alabama lies in the buckle of the Stroke Belt. We have a high incidence of atrial fibrillation," Osorio says. "But a large part of our patients are not coming from Birmingham." He estimates about 70 percent treated in the lab travel from Mississippi, Tennessee, Georgia and Florida.

Osorio says that although other EP programs in the region are capable of doing the same procedures, it is Grandview's quest for quality based on meticulous data collection that produces efficacious outcomes. "We have success rates as good as any other center in the country, if not better," he says.

The value of seeing an EP may be underestimated by patients and the medical community alike, especially in the early stages of AFib. But a 2014 study published by the National Institutes of Health on AFib treatment patterns of cardiologists and electrophysiologists, showed the approach by EPs differed significantly and resulted in half the mortalities.

Treatment for AFib often focuses primarily on mitigating the symptoms to make patients feel better. Osorio disagrees with that approach. "20 percent of strokes are because of atrial fibrillation," he says. "Decreasing the risk of stroke should be the focus, along with making patients feel better."

Osorio says it wasn't long ago that patients with early-stage arterial fibrillation were told they could live with the condition and no treatment. "But we have more data now, and it shows this affects a lot of patients," he says, adding that only about 50 percent of the patients they see in the lab are in the early stages of AFib, which is usually progressive. "So we're not appreciating the degree for which this can affect patients, their quality of life, and overall mobility--and risk for strokes. The right treatment for a patient can absolutely decrease the risk of stroke."