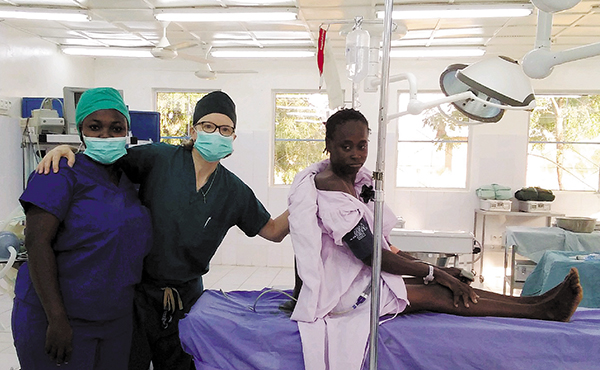 "He called me from Africa and said, 'I've been posted here, and if we got married, you could go too,'" says Holly E. Richter, PhD, MD, about her husband's unconventional proposal 35 years ago. At the time, she thought, what the heck "and we got married and moved to the capital of Niger."

That was 1983, when Richter had finished her PhD. "We lived on the edge of the Sahara for two years," she says, while her husband, an agronomist, worked to improve agricultural sustainability in the area through the nonprofit International Fertilizer Development Center (IFDC). "I worked in his lab, taught at the American school, played softball with the Marines, and saw West Africa."

After they returned to the states, it was only a few years before Richter entered UAB School of Medicine. "With what I was doing with my PhD, I could do that in human systems," she says, going on to complete her residency and then her fellowship in obstetrics and gynecology in 1997. "I've done everything here at UAB. I've been faculty since 1996."

Seven years later, the call of Africa resurfaced when Andy Norman, MD, came to work with her. He had been in Nigeria for 17 years. The last two years, he had been performing obstetric fistula procedures on women in the city of Jos. "While he was with us for those six months, he introduced me to what kind of work was being done over there--and needed to be done," Richter says.

Norman told her about the estimated one million women in developing countries who face the stigma of incontinence caused by an obstetric fistula. The incontinence results from a hole forming between the vagina and the rectum or bladder during obstructed, prolonged labor that may last days. The women have little access to the only solution--reparative surgery.

"The women are wet, and they're smelly all the time, because they constantly leak stool or urine," Richter says. "Their tribes will have nothing to do with them." Shunned, these women live on the fringes.

Norman's stories of the women hooked Richter. "I know Africa, so it only made sense," she says. She headed out the next year and has made 14 annual trips so far to countries throughout the continent, including Uganda, Democratic Republic of Congo, Sudan, Liberia, and Ghana.

Orchestrated by the Worldwide Fistula Fund (WFF)­, for which she now serves as a board member, the trips last up to two weeks. "You eat, go to sleep, get up the next morning, and do it again," Richter says. Sometimes there's air conditioning. "Sometimes you don't even have water, so you get good at taking bucket baths and brushing your teeth with your finger."

The last few trips have brought her back to Niger. "They have a main fistula and leprosy center in Danja. I fly into Niamey, and usually fly out the next day to Maradi with the Serving in Mission pilots. It's beautiful, seeing the land," she says.

Surprisingly, she finds the two-and-a-half hour flight in the four-seater plane exhilarating. "I'm actually a pilot. It's cool to get back into a single-engine plane," she says. It takes another 150-mile road trip to reach Danja.

But the impact on the women dampens any discomforts. "Even fixing a simple fistula can be so satisfying in the sense of helping one of these women," Richter says, adding that the group always brings extra comforts for the ladies, such as toothbrushes.

The downside are the cases that go beyond what she can perform during the time given, such as a leak through a weakened urethra. "But you know that at least you've provided the first step back into a normal world for her--whatever that world is, it's so different from ours --and that's gratifying."

The age of those affected runs from girls of 17 to women of 70. "It's so important to appreciate who she is in that environment and what she went through to get this injury. It happened because of not being able to deliver the baby and ends up with a horrific consequential effect," Richter says.

At least half to two-thirds of the patients have had previous attempts at fixing something. "Sometimes the whole urethra is gone or the bladder base is gone," Richter says. "It's really not a 'go in an get out' kind of thing. It needs a dedicated, consistent approach to take care of these women. It's a rich experience, very consuming and very rewarding."

The aggravating aspect for her is that it all happens because of something preventable. "There is still so much room for improvement in the care of women," she says. But Richter doesn't see that happening until women are valued by the religious leaders and governments controlling these areas. "We will not see true advancements in women's healthcare until that happens." In the meantime, she remains dedicated to helping them. "I am heartened by the strength of these women, as well as their resolve to overcome their conditions."