Some People are Resilient to Alzheimer's 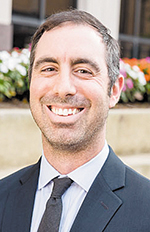 UAB researchers want to know why

Researchers believe that some people -- perhaps 30 to 50 percent of the population -- are resilient to the effects of Alzheimer's disease. Understanding what makes these people resilient to the symptoms of dementia could be a key to developing ways to treat or cure the disease.

"These are people who develop the pathology of Alzheimer's disease: the tangles of tau protein and the accumulation of amyloid protein in the brain," said Jeremy Herskowitz, PhD, assistant professor in the UAB Department of Neurology, School of Medicine. "But they don't develop the symptoms of the disease and are resilient to its effects. If we can understand why this segment of the population is resilient, we might have a new target for slowing or preventing the disease in those who are not resilient."

One factor might be the size and shape of dendritic spines in the brain. In a paper published in 2017, Herskowitz showed that aging individuals who had amyloid and tau buildup, but did not develop dementia had longer and more numerous dendritic spines than those who developed dementia. Dendritic spines are sub-units of neurons that act as connectors between neurons, enabling the exchange of information, known as synapses, to occur. This is the basis for memory and learning.

Using an innovative imaging system developed in Herskowitz's lab, the researchers will examine the brains of 200 subjects from a tissue repository at Rush University who were resilient to dementia in life, but had significant amounts of amyloid and tau protein.

Herskowitz's system uses novel software to turn microscope photos of brain tissue into 3D images that allow researchers to look more fully at the shape and dimensions of the dendritic spines. The team will look for the presence of more numerous, larger spines, as well as attempt to see if they can find differences in the brain tissue that might explain why.

"If we can figure out why these people don't have dementia, we might take great strides at learning why others do have symptoms," Herskowitz said.

The next step will involve researchers at Emory University who will conduct proteomic testing of the brain samples, to see if they can identify changes in proteins found in the resilient brains.

"We will be able to look at each set of dendritic spines for changes or clues that might help explain resiliency, such as changes to proteins or enzymes within the brain," Herskowitz said. "The next step will be to duplicate any changes we find in animal models and test key proteins or enzymes for therapeutic potential."

The researchers also have functional magnetic resonance imaging scans on their 200 subjects done at Rush University during the patients' lifetimes. The teams will be able to compare changes seen at the cellular level to changes in brain function identified by the fMRI.

UAB has joined a national consortium of researchers on resiliency in Alzheimer's disease sponsored by the National Institute on Aging. The consortium is part of the NIA Accelerating Medicines Partnership - Alzheimer's Disease, a partnership among government, industry and nonprofit organizations that focuses on discovering novel therapeutic targets and on developing biomarkers to help validate existing therapeutic targets.

According to the NIA, dementia, of which Alzheimer's disease is the most common form, is estimated to affect 36 million people worldwide. This number is expected to rise to 115 million by 2050 unless an effective therapeutic is developed. The financial toll of dementia is already staggering. In the United States alone, the costs of caring for people over age 70 with dementia were estimated to be as high as $215 billion in 2010.