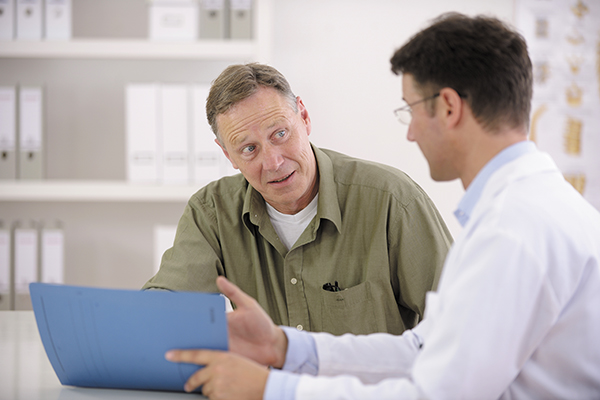 Last month, the U.S. Preventive Services Task Force published their final recommendation for screening men for prostate cancer. After reviewing the evidence, the task force issued a 'C' recommendation for men ages 55-69 with an emphasis on "informed, individual decision-making based on a man's values and specific clinical circumstances." For men aged 70 and older, the task force issued a 'D' recommendation, noting such screening would not routinely be advised as potential benefits do not outweigh harms.

The recommendation applies to all adult men who have no signs or symptoms of prostate cancer and who have not previously been diagnosed with the disease - including men at increased risk for the cancer. However, the recommendation statement incorporates specific sections to address higher risk populations with additional information for these men and their clinicians to consider during the decision-making process.

While the final recommendation letter grades didn't change from the draft report issued last year, USPSTF Vice Chair Alex Krist, MD, MPH, said some of the wording was refined after reviewing the feedback submitted from various stakeholders during the public comment period. "It's a little bit more clear that we're trying to cue patients and clinicians in the factors that might lead a man to be screened or not be screened," he said, adding there is an increased focus on this being an individual decision.

"Prostate cancer is one of the most common cancers to affect men, and the decision whether to be screened is complex," Krist noted. "Men should discuss the benefits and harms of screening with their doctor so they can make the best choice for themselves based on their values and individual circumstances."

While the routine use of prostate-specific antigen (PSA) screening elicits strong opinions both for and against, Krist pointed out the evidence-based USPSTF recommendation aligns with a number of other organizations, including the American Urological Association (AUA). While specific screening recommendations from the AUA, American Cancer Society, National Comprehensive Cancer Network, and USPSTF are somewhat varied in the details, all stress a shared decision-making component between patient and clinician.

Krist - who is a professor of Family Medicine and Population Health at Virginia Commonwealth University, an active clinician, and director of community-engaged research at the Center for Clinical and Translational Research - said it is important for a physician and patient to talk about the clinical implications of screening in the context of that patient's particular circumstances.

"For some men, it may not even need a discussion," he noted of patients facing competing health concerns that would significantly reduce or eliminate the need to worry about prostate cancer, which is typically slow growing. For others, who are at higher risk for the disease and expected to live more than 10 years, the decision should be weighed in terms of benefits versus harms.

There are three major concerns tied to PSA screening, said Krist. The first is the number of false positives as a result of testing. Krist noted, "240 men out of 1,000 will have a high PSA ... and approximately 140 of those are false positives." There are a number of reasons why a man's PSA level might be elevated from cancer to an enlarged prostate or inflammation of the prostate. Krist said many of those with elevated PSA levels will go on to have a biopsy for a definitive diagnosis. In addition to stress, there are other potential side effects with biopsy including pain, bleeding and infection.

The second concern, he continued, is overdiagnosis. "Of those screened, 100 out of 1,000 men will be diagnosed at some point in their lifetime (with prostate cancer), but 20 to 50 percent of them will be overdiagnosed," Krist said. "That's a really hard concept for people to grasp because there is fear with cancer, but it won't cause any signs or even symptoms ever in their lifetime," he explained of those in the overdiagnosed group who have prostate cancer that never grows, spreads or harms them.

The third issue is that the majority of men, once they've received a prostate cancer diagnosis, will go on to have surgery or radiation treatment. Data cited by the USPSTF shows 80 of the 100 diagnosed undergo one of the two treatments initially or after a period of active surveillance. Yet, Krist said, there are harms that could result from either treatment option.

Estimates based on observed benefits in the ERSPC trial for men 55 to 69 years of age and on harms derived from pooled absolute rates from three treatment trials found 50 of the 80 who choose surgery or radiation treatment will experience erectile dysfunction and 15 will have urinary incontinence. Further, the USPSTF estimates three men will avoid cancer spreading to other organs, 1.3 will avoid death from prostate cancer, and five will die from the cancer even after surgery or treatment.

Krist said the Task Force didn't make any recommendation for men younger than 55 due to a lack of clinical data. "I certainly think we need more research on men under 55 at higher risk - African-American men and those with a family history," he said. Krist added this call for additional research was part of the group's report to Congress.

On the other end of the age spectrum, he said there were quite a few comments about extending screening. "In the draft, many folks criticized us and said men are living longer so we should be screening longer," Krist noted. However, he continued, "There is good data that there are more false positives, more overdiagnosed prostate cancers, and more harms for biopsies and treatments. We had good confidence that over (age) 70, men are more likely to be harmed than would benefit from screening."

Krist pointed out these recommendations pertain to routine screenings across the broad population and reiterated individual circumstances at any age could influence screening decisions. At the heart of the recommendations, Krist concluded, "We want men and their doctors to talk about the benefits and the harms. We want men to make informed decisions about what's right for them."