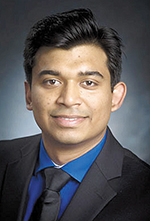 Physician-scientists from UAB using big-data recently summarized in the Journal of the American Heart Association the prevalence of cardiovascular manifestations, rates of defibrillator placement (ICD) and predictors of in-hospital mortality in sarcoidosis -- a disorder that affects multiple organs.

Sarcoidosis is a systemic illness with a strong propensity to involve the cardiovascular system. It is the growth of tiny collections of inflammatory cells -- granulomas -- in different parts of the body, most commonly the lungs, lymph nodes, eyes and skin. Utilizing the largest in-patient database -- the National Inpatient Sample -- a team of researchers identified more than half-million sarcoidosis hospitalizations without any history of ischemic heart disease from 2005 through 2014 in the United States.

"We conducted a retrospective study to determine trends of hospitalizations and outcomes in sarcoidosis during 2005 to 2014," said UAB's Nirav Patel, MD. "We examined rates of ICD, cardiac resynchronization therapy, permanent pacemaker placement, and factors associated with in-hospital mortality. We also examined racial disparities in outcomes in sarcoidosis hospitalizations in a propensity matched subgroup.

Researchers have found the rate of hospitalization for sarcoidosis has increased, and in-hospital mortality associated with sarcoidosis decreased from 2005 to 2014. Heart failure and arrhythmias were the most prevalent cardiovascular manifestations in sarcoidosis, followed by pulmonary hypertension, non-ischemic cardiomyopathy and conduction disorder. Conversely, increasing hospitalizations with sarcoidosis, rates of ICD implantations were low -- less than one percent -- and have not shown any upward trend from 2005 through 2014.

"We hope to inform clinicians that the co-occurrence of cardiovascular manifestations in sarcoidosis could be a leading cause of death," said Pankaj Arora MD, assistant professor in the UAB Division of Cardiovascular Disease. "Our investigation highlights that aggressive primary and secondary prevention of co-morbid cardiovascular and pulmonary conditions is critical for patients with sarcoidosis."