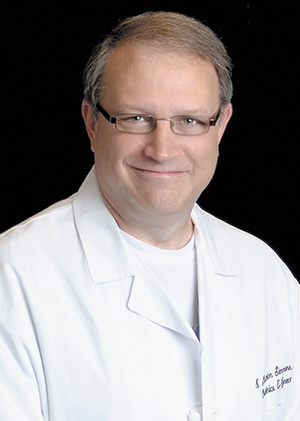 For expectant parents, Malcolm Simmons, MD is their MVP. After all, they've selected the Shelby Medical Center OB-GYN to be their baby's first contact with the world. For iconic coach Paul "Bear" Bryant, Simmons was a talented punter leading the Crimson Tide during his last season as the team's lodestone.

Bryant was known for his toughness and for being a role model for his players. For Simmons, the nation's 10th best punter in 1981, Bryant was a paternal figure. When he retired in 1982, Bryant held the head coach record for the most wins (323) in collegiate football history.

"He was an awesome teacher," Simmons said. "By the time I got to Alabama, he was a grandfather figure to us. He was different (in the 80s) than in the '60s and '70s when he was coaching and teaching. He was a legendary coach, but more than that, he was a legendary person. He cared about what we did and taught us about life. He taught us to expect the unexpected and be prepared. It was an unbelievable experience."

Simmons was the University of Alabama's punter from 1981 to 1983, a position that comes with intense pressure. Punting, like medicine, requires awareness of everything happening on the field - it's not just keeping an eye on the ball, it's keeping an eye on the entire gridiron. The punter has to kick high enough and far enough to get the pigskin downfield, while keeping the ball clear of the end zone. And he's also working at high speed under intense scrutiny to position that ball in just the right spot with a freight train of action headed his way.

Bryant's intensive coaching and knowledge bank meant his players were prepared for any eventuality when they hit the field.

"There's a huge parallel in what I learned from Coach Bryant that prepared me for what I am doing now," Simmons said. "To accomplish a win, we had gone over the plays and done everything we had to do in our minds. In surgery, you're also taught to expect the unexpected. I always think of things that potentially could go wrong and what I'm prepared to do if that situation should arise."

Simmons' time at the Capstone shaped him in more ways than one.

"Coach Bryant was a very kind man," Simmons said. "If you needed to talk to him, his door was always open. We came in, having left our homes for college, and he made a home for us. He gave us an opportunity to bend his ear with questions about anything. He was always excited to talk to you about whatever was going on in your life."

At the time, Bryant had his own television show. After Simmons punted the coverage on one of his first games against Georgia Tech, the young player and his family warranted a mention on the show, "a thrill for everybody," Simmons said, recalling his parents' enjoyment of the acclaim.

As a member of the Tide family, Simmons still attends as many games as he can, as well as the special functions the university holds for its players.

"It's great to enjoy the fellowship with previous players and the camaraderie with stars like Bart Starr and Joe Namath," said Simmons, who played on the winning team at the Liberty Bowl in 1982. The Tide beat Illinois 21-15 in the last game of Bryant's career, just over a year before his death at 69.

The next year, Simmons would go on to play for Coach Ray Perkins, who had a hard act to follow.

"It was a difficult transition for all of us, but it had to be done," Simmons said. "Coach Bryant had a long tradition. It took a lot of guts for Coach Perkins to come in, and he did the best he could at the time."

After college, Simmons joined the pros - suiting up for the San Francisco 49ers as a free agent for a short time before pursuing his career in medicine, following in the footsteps of his father, a cardiovascular and thoracic surgeon.

"I don't think I gave professional football that big of a chance," he said. "I was more excited about getting started in the next phase of my life."

Simmons went on to attend medical school at UAB and complete his residency at Carraway Medical Center. He has been fortunate to combine the knowledge gained from his medical education with life practices learned from Coach Bryant in order to perform at his best.