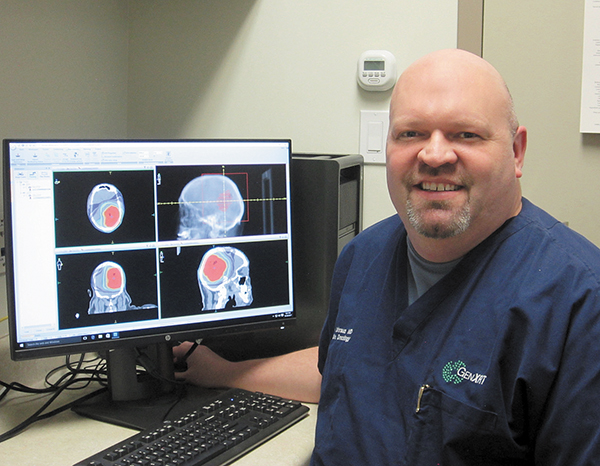 Jahraus with his first Optune patient on the treatment planning system.

The battle against brain cancer is a personal one for Christopher Jahraus MD, a radiation oncologist with Shelby Baptist Medical Center. When Jahraus was a fourth-year resident in his specialty, his father was diagnosed with glioblastoma, a highly malignant tumor.

"I had said this is the one disease I hope no one in my family ever gets," Jahraus said. "I knew how much suffering these tumors cause and that this is a really devastating disease with a miserable survival."

Despite surgery and cutting-edge treatment at Massachusetts General Hospital, Jahraus' father died within a year from the aggressive tumor's growth. Now there is a treatment that might have given him more time.

"I'd never heard of it, and neither had many others in our field," Jahraus said. "It's a remarkable thing. It's not a replacement for any current therapy, but an adjunct to chemotherapy and radiotherapy."

Even patients who battle glioblastoma with surgery, chemotherapy and radiation have a median survival rate of only about 15 months. The American Association for Cancer Research's 2017 data demonstrates more than a doubling of survival in patients with glioblastoma treated with TTF at four and five years, when compared to standard therapy.

"Patients survive an average of five months more using this," Jahraus said. "When you have this short time left, five months is a big deal. How great is it to be able to give patients a realistic shot at a longer survival and not to have to travel some place to do it?"

Treatment is delivered via electrodes on the patient's scalp through which a low-energy current creates a field to prevent brain tumor cells from reproducing. The current, imperceptible to the patient, alters the ability of sub-cellular structures or microtubules to assemble, which is necessary for cancer cells to divide and grow.

"Organisms have to organize in a certain way in order to grow, and the charge field aligns them to prevent that," Jahraus explains. "It doesn't affect normal cells. They are not dividing to the degree as cancer cells. The patient feels nothing, but it's enough to arrest the growth of these glioblastoma cells."

When Jahraus prescribes the treatment, Novocure sends a professional to the patient's home to train them on using the system. Shelby Medical treated its first patient in August using Novocure's Optune.

"Patients do the best if they wear the active system for 18 hours a day. "It seems a like a lot, but they carry on about their normal business," Jahraus said. "What's remarkable about this is that when I was in training 14 years ago, the typical survival was 12 months with radio therapy and other treatment."

Shortly after he finished school, Jahraus remembers reading the New England Journal of Medicine's account of a discovery that could potentially add three months to a patient's life using the chemotherapy drug Temozolomide (TMZ). TTF, says Jahraus, is the first real stride forward in that arena since that time, and Shelby is at the forefront of technology.

"Cancer patients are near and dear to my heart," Jahraus said. "To see this treatment available to my patients shows our commitment to deliver the best we can to our patients. I wish to goodness something like this had been around for my dad. Brain tumor patients' lives are already so affected and they endure so much. The potential to keep them going is exciting stuff. That's the art of oncology -- giving a patient a treatment that interferes with life minimally but offers them a meaningful chance of survival."

The treatment is approved only for glioblastoma, but Jahraus said he hopes the potential for the low-energy electricity in other applications is on the horizon.

"You wonder in your heart of hearts if this could turn into cures one day, but you hesitate to put it in those words," Jahraus said. "You don't want to put out false hope, but we are getting incredible outcomes. As data matures into the future, who knows?

"This treatment shows 30 percent improvement in the length of survival. That's meaningful. It blows the socks off Temozolomide that was heralded as the most significant advance in the past 20 years. When we look on this someday, we may see that it was the next big step."