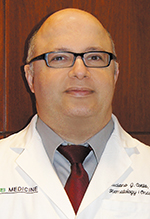 The positives of CAR T-cell therapy include not only a solid success rate with a one-time treatment, but a potential cure without irradiation and many other transplant-related toxicities by harnessing the patient's own T cells, the killer cells of the immune system.

Filtered from a pint of the patient's blood, T cells are isolated and transfected with a specific protein (a chimeric antigen receptor or CAR) that targets an antigen found on most leukemia cells, such as the CD19 protein. "Then it's purified and grown in culture, while the patient undergoes chemotherapy to be able to receive those cells," says Costa, who serves as an associate professor of medicine at UAB Division of Hematology and Oncology.

The entire engineering process takes two to three weeks. "Then the cells are infused into the patient," Costa says. Not only do the engineered T cells then latch on to the leukemia cell and destroy it, but they are triggered to expand and proliferate, allowing them to seek out and annihilate the remaining cancer cells.

In August, Novartis's tisagenlecleucel (Kymriah) became the first approved CAR T-cell therapy in the U.S. The FDA approval covers only pediatric use of the gene therapy in ages up to 25 for those with relapsed or refractory B-cell acute lymphoblastic leukemia (ALL). An estimated 3,100 patients under the age of 21 are diagnosed with ALL each year, accounting for around 34 percent of all childhood cancers, according to the National Cancer Institute.

For adults with large B-cell lymphoma -- around 24,000 adults in the U.S. each year - Gilead Pharmaceuticals' axicabtagene ciloleucel (Yescarta) garnered the FDA nod in October. It became the second gene therapy approved in the country and the first for certain types of non-Hodgkin lymphoma.

Administering the gene therapy is as straightforward as a blood transfusion. "What can get complicated is management of those patients for the days and weeks to come as those cells do what they're meant to do and attack cancer cells," Costa says.

During the first week, the patient can face cytokine release syndrome (CRS). In the pivotal trial of tisagenlecleucel, almost half of the patients struck by CRS intensified into a cytokine storm. In trials of Yescarta, around 13 percent progressed into these severe symptoms. "It's a very acerbated inflammatory reaction," Costa says. The patient becomes very sick with a high fever, a drop in blood pressure, and it becomes life-threatening in about half of the patients.

Treatment calls for administering anti-IL6 agents. "These drugs existed to treat another autoimmune disease that had nothing to do with cancer, but they have had a potent effect in controlling this syndrome," Costa says.

To specifically treat CRS, the FDA expanded approval this year of the rheumatoid arthritis drug Actemra (tocilizumab). After only one or two doses of the drug, nearly 70 percent of patients completely resolved their CRS in two weeks. The FDA now requires hospitals administering the T-cell therapies to have this immunosuppressant drug on-hand.

The other concerning side effect to CAR T-cell therapy is neurologic toxicity, which developed in 44 percent of the Kymriah patients and 87 percent of those utilizing Yescarta. "This is more of a syndrome without a clear mechanism," Costa says. Patients can be confused, lose their ability to speak, become comatose, or even die. However, most recover when treated with high doses of steroids.

Costa warns that not enough long-term data on CAR T-cell therapy exists yet, whereas bone marrow transplant has been used for decades and has proven to be effective in about half of patients. "Be careful not to discard treatment that has safety and efficacy proven over time in favor of something that is quite promising, but potentially more toxic and for which we do not know the longevity of therapy," he says.

A downside of the promising CAR-T cell therapy is the prohibitive cost. Gilead Sciences has set the one-time treatment price for Yescarta at $375,000. Novartis set the price for Kymriah at $475,000, but will not charge for patients who do not achieve remission within three months.

"CAR T-cell therapy could potentially become a safer, more attractive option than bone marrow, but we're not there yet," Costa says, though he admires the mechanics of gene therapy. "It's a concept that has been dreamed of for decades -- to essentially use your own immune system to reprogram itself and fight the cancer without affecting normal organs."