Inflammation is the Common Denominator in Chronic Diseases 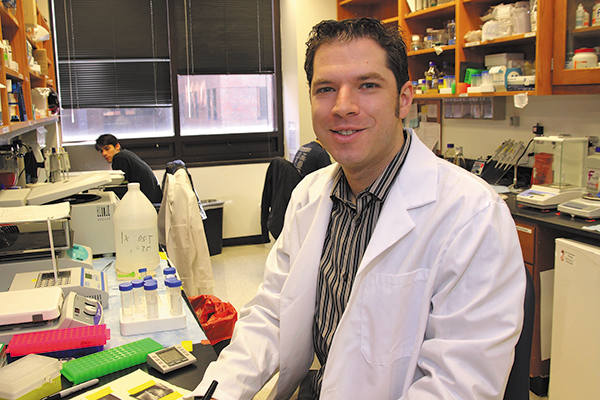 Andrew West, PhD, investigates the problem of inflammation of the brain.

Lupus and asthma, COPD and diabetes, Crohn's disease and Alzheimer's--what do all these and so many other chronic diseases have in common? Inflammation is a characteristic part of the body environment as these disease processes develop.

In a world full of pathogens, inflammation is the immune system's arsenal to fight invaders. But like a guided missile that loses its way, it can cause a tremendous amount of collateral damage, destroying the body's own tissues with friendly fire.

How do we intercept destructive inflammation in diseases without leaving the body defenseless against infection? Andrew West, PhD, is working to answer this. West, co-director of the UAB Center for Neurodegeneration and Experimental Therapeutics, serves as co-chair of the Parkinson's Disease Biomarker Program for the National Institutes of Parkinson's disease.

A new biomarker that correlates with the presence and severity of Parkinson's Disease now allows researchers to measure the activity of the LRRK2 (pronounced Lark two) protein in biofluids.

"Our lab began working on Parkinson's from a genetics perspective. We saw genes associated with small components of the disease beginning to align with those involved in the regulation of inflammation. That's something that wasn't on our radar before," West said. "We don't yet know the basic causes of Parkinson's and Alzheimer's, but we are learning a lot about the processes."

Mutations associated with LRRK2 are the most common known factor in familial Parkinson disease. Expression of LRRK2 is elevated in B cells, T cells and monocytes, which secrete more inflammatory cytokines. LRRK2 seems to be related to the aggregation and misfolding of alpha-synuclein, which contributes to neurodegeneration.

"Developing a way to influence LRRK2 expression could help us block alpha-synuclein problems and prevent the death of dopamine producing cells in the substantia nigra," West said. "This offers us a target for a potential treatment to prevent or slow down Parkinson's Disease."

While investigating the problem of inflammation in the brain, UAB researchers have also come across parallels in other chronic diseases.

"Rather than an inflammatory cascade, when we examined the brains of people with autism looking for synaptic changes, we found anti-inflammatory cascades," West said. "This was a surprise. What it means is yet to be determined. Would it be beneficial to promote anti-inflammatory support, or is something else going on? Could pursing this finding lead to treatments? In mouse models, we are seeing that the plasticity of the brain may eventually allow us to help patients. It will take time, but the potential gives us hope."

The ability to detect markers of inflammation and targets for intervention in diseases like Parkinson's is also a hopeful sign for millions of people suffering from other chronic diseases where inflammation plays a role.

Francis Lund, PhD, is director of the working group for UAB's research focus on inflammation, infection and immunity. Her research is aimed at identifying the key players that suppress or exacerbate mucosal inflammatory responses with the long-term goal of developing therapeutics to treat immunopathology associated with chronic infectious, allergic and autoimmune disease.

"Inflammation is a component of almost every chronic disease from rheumatoid arthritis to COPD, most types of heart disease and many types of cancers," Lund said. "Some of the drugs we use for one disease are used for others. For example, the cytokine inhibitors we use in arthritis may also be used in Crohn's disease and the checkpoint inhibitors developed to treat cancer may be used to train the immune system to rerecognize other problems."

In treating many chronic diseases, the goal is to quiet the immune system.

"Depending on the disorder, doctors may prescribe anti-inflammatories or steroids to calm down the immune system and manage the disease," Lund said. "We're working to learn more about inflammatory diseases and develop new drugs to treat them.

"In the meantime, there are strategies doctors can encourage patients to use to help keep their immune systems healthier. Finding better ways to manage stress, sleeping and eating better are good for the immune system. A balanced diet with plenty of fruits and vegetables can give you antioxidants to help block inflammation. You may also want to look at foods that may increase the risk of a systemic immune system response.

"Another consideration is obesity. There is a correlation with inflammation, and every excess pound patients manage to shed not only fights obesity--it could also fight inflammation."

Being able to measure inflammatory response has also become helpful in treating diseases like rheumatoid arthritis and lupus.

"Rheumatologists can look at circulating levels of protein," Lund said. "If there is a drug to block that protein, we can get a better sense of what drug is likely to work best. In lupus, doctors can look at inflammation to predict flares, which allows us to fine-tune medication to ease symptoms.

"Transplantation research has also taught us a lot about the immune system. We have developed biologics to block proteins that cause inflammation. But we have to be careful about increasing susceptibility to other diseases.

"We don't want to block all immune response. We use vaccines to rev up the immune system to help it recognize diseases, and we're creating adjuvants to increase response to make inflammation a more effective weapon against other diseases."

"The key is to better understand how the immune system works. When it detects a threat, proteins send immune cells to tissues. When they are activated, usually by a pathogen, they are supposed to kill it. But when tissue is damaged, the cells still go there and begin to kill that tissue. We're trying to figure out how to teach the immune system not to attack what it shouldn't.

"With allergy shots and transplantation, we've been able to teach it not to pay attention so it doesn't launch an immune attack. We're working to develop similar treatments in other diseases with research such as that Dr. West is doing in Parkinson's."

With so many chronic diseases, especially those that develop and progress as we age, there is a lot of work ahead.

"When the immune system was evolving, it did a good job at learning to attack infections so humans could survive long enough to pass on their genes," West said. "It didn't do that much selecting to counter diseases that show up later in life, which is why so many chronic diseases become an issue as we get older. Now that we have a way to detect LRRK2, I'm hoping that will allow earlier detection in people at risk for developing Parkinson's, particularly in those showing what could be early symptoms such as sleep disruptions and psychiatric changes.

"We're working to develop funding support for what would be the first Parkinson's center focused on inflammation research. We need a weapon with laser-guided precision to defeat Parkinson's. We want to make the immune system smarter."