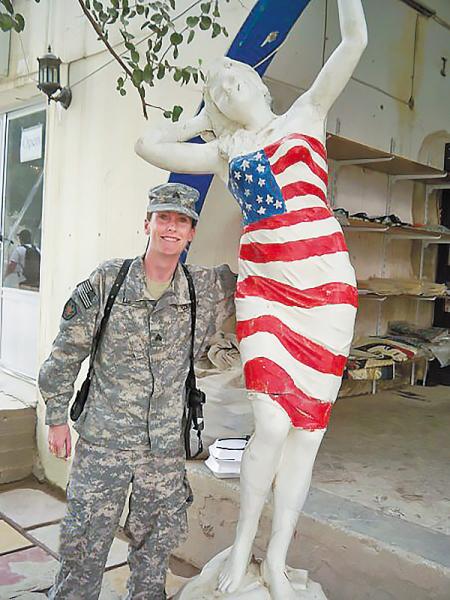 Mary Lee, MSN, was trained to carry an automatic weapon in a mission to protect and defend. Currently a first lieutenant in the Army Reserve, when she joined the armed forces in 2007, her objective was to be a solider, part of a band of brothers -- and sisters -- whose relationships transcend bloodlines.

She deployed to Iraq in 2009 as an Army specialist, and in her work as a photojournalist found her true calling. Now a nurse practitioner in the residency program at the Birmingham VA Medical Center, Lee had been tasked to an Army combat support hospital in Baghdad when what she witnessed through her camera lens changed her life focus.

"I saw how the Army healthcare system took care of soldiers," Lee said. "It was very interesting for me in Iraq to see a nurse taking care of a patient. It was almost a deeper commitment - this was not just a patient to her but a fellow soldier. A nurse is trained to heal, but she is trained first as a soldier to kill and defend herself."

The dichotomy of healing in a time of killing was not lost on Lee, who says there's a clear internal struggle. Through her father, a Navy veteran, and her brother-in-law, an active duty Air Force fighter pilot, Lee developed respect for the discipline and camaraderie of military culture.

"There's a deeper commitment when caring for your own," she said. "You understand as a fellow service member what that person is going through. It's not like a hospital where family can visit. You have to be everything for that patient."

Back in the states in 2010, Lee enrolled in a collaborative partnership with the UAB School of Nursing and the Birmingham VA Medical Center, which earned the prestigious designation as one of 15 VA Nursing Academic Partnership sites in the U.S. in 2009. She further refined her objective to become a psychiatric-mental health nurse practitioner with the VA and is the only student to complete the VANAP undergraduate and graduate programs (VANAP-GE) and to become a PMHNP resident.

The UAB School of Nursing also is one of only four sites in the country that has a graduate residency program for mental health nurse practitioners. After finishing nursing school in 2012, Lee's personal experiences pressed her to focus on that growing need.

"The husband of one of the girls I deployed with committed suicide," Lee said. "I ended up getting my MSN in psychiatric health and did clinical trials with veterans again. Halfway through the program, I talked about a VA residency and post graduate training as a third phase as a nurse practitioner. By the end of September, I will be done."

Lee, whose unit is part of the Bravo Company 75th Combat Support Hospital based in Tuscaloosa, is committed to making veterans the focus of her work.

"A couple of people I've known personally have been affected by suicide," Lee said. "That makes me more vigilant about asking questions and assessing veterans. People know or are attached to a veteran in some way and may not even realize it. They have a dad or brother or friend who has served and might not even talk about it."

"I took a class to be an Army suicide prevention trainer to go to different units to teach," said Lee, whose promotion from second lieutenant to captain is currently in the works. "It's important not only to work with veterans facing these issues now, but to make them aware before they even deploy."

Though Lee's unit deploys in October, she's not yet on the roster of troops headed to the other side of the world.

"I know my number will be coming back up soon, and I'm ready," she said. "I like the idea of deploying. At the end of the day, I'd rather be home, but it's a great honor to deploy. Now, in my new capacity, I'll be able to go out on combat stress teams to do interventions right there on the battlefield. It will be very fulfilling."