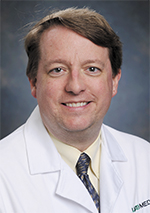 Though the Merit-based Incentive Payment System (MIPS) for Medicare physicians does not take effect until 2019, UAB Medicine has already executed several successful campaigns to improve processes that will raise their MIPS rating.

The rating will rely on submitted data that will correlate into a score that ranks each physician among every other clinician in the Medicare system. "If you fall below the average, you get a penalty, and if you're above the average, you get an increase," says Stephen W. Stair, MD, FACP, the medical compliance officer and clinical associate professor with UAB Medicine. "And it's a pretty significant amount if you're not ready for it."

As an academic hospital with over 100 qualifying physicians, UAB Medicine must submit their MIPS results on their physicians as a group rather than individually. "We're all under one tax ID number," Stair says, adding that their efforts this year are related to PQRS, but will be instrumental in defining their MIPS score in 2019. "UAB Medicine already ranks high among academic institutions, but we want to continue to work toward improvement."

CMS created a category titled Quality which replaces PQRS and will count toward 60 percent of a physician's score in the first year. UAB has focused on making progress in this area during the past year.

UAB Medicine made the diabetes eye exam a primary target for improvement. "This is a challenging measure because patients have eye exams outside UAB," Stair says. "And obtaining the documentation of the exam is a necessity."

Academic hospitals nationwide averaged 50 percent compliance for the eye exam among qualifying patients. UAB reached only 26 percent in 2015. "This is one of the few areas we struggled in," Stair says. "However, we managed a dramatic improvement. Last year, we reported at 45 percent. We're doing an innovative outreach."

The increase stems from a broad push to educate patients. UAB emailed patients a video on the importance of the dilated-eye exam and the need for their eye doctor to send the results to UAB.

Flu shots had also been a trouble spot. Other academic institutions averaged 63 percent compliance among qualifying patients while in 2015, UAB sat at 54 percent. The problem ran two-fold. First, many Alabamians believe the flu shot makes them sick or has no effect. Also, there are a number of pharmacies and groceries where UAB patients could get the shot without notifying UAB.

"We did a huge system-wide initiative," Stair says. They emailed 104,000 patients debunking the myths surrounding flu shots, and then followed up with a phone campaign to everyone over the age of 50. Of the 54,000 who were called, 14,167 people responded to the automated question about getting a flu shot. If they answered yes, that met the Medicare measure as patient-reported compliance.

The massive outreaches have not been cheap. "This is what's required now for population medicine," Stair says. "You have to invest. The return on investment will be large, because not only do we have healthier patients, but the MIPS scoring could save us four to nine percent on all of our Medicare reimbursements."

The largest jump in reporting for UAB has come from their BMI (body mass index) screening and follow-up. If the patient falls above a certain BMI level, Medicare requires patients to receive nutrition and exercise education.

"Many times, we talk about weight loss to the patient, but we don't document it," Stair says. So UAB added a checkbox for physicians to click in the notes section of the EHR chart. "Now that's a codified data point, and we can easily pull the analytics." Previously, UAB had to rely on clinicians typing in a note about having discussed the issue.

As a result of that EHR modification, the UAB Medicine BMI reporting percentage skyrocketed from 38 to 78 percent in one year, which is well over the 64 percent average reported by academic hospitals in 2015.

"It takes a lot of effort from many areas to make this happen," Stair says. "It's been a really interesting data-driven process for us. It's validated all the work we've done for so many years in primary care, and the importance of primary care in taking better care of patients."