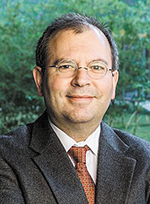 A generation ago, when coronary stents started becoming a household word, they were a revolution that in many cases made traditional open-heart surgery unnecessary. Now there's a new breakthrough called transcatheter aortic valve replacement (TAVR) that uses minimally invasive surgery to replace a failing aortic valve with a new one.

"In this process, we use tissue from a cow or a pig to make a heart valve and then we sew the newly formulated valve into a mesh cylinder - similar to a stent," according to Stephen Bakir, MD of Cardiovascular Associates. "That valve and stent is then collapsed onto a balloon and threaded through the patient's blood vessels over a wire and placed inside the patient's own failing aortic valve. The balloon is blown up to deploy the stent and the new valve starts to function immediately. The patient's native aortic valve remains in place to help anchor the new valve." 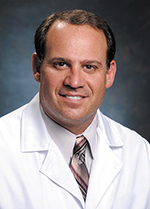 "The valve replacement can be done through the femoral artery into the groin without having to do a larger incision which is much harder to get over," says Russell Scott Ronson, MD, chief of cardiothoracic surgery at Brookwood Medical Center. "The patient no longer has to be put on a heart-lung machine, the chest doesn't have to be cut open, and the physiologic setback to the body compared to traditional surgery is much, much less.

"The new valve is completely collapsed down to a very small cylinder like the size of a piece of pasta which then gets navigated through your blood vessels through your legs and up into your heart."

The new valve is encased in a small ring of fine wire mesh. One manufacturer makes the mesh of cobalt chromium, the other from titanium and nickel.

Insertion in the groin is not the only option for deploying the TAVR device, Ronson says. "It can also be inserted through a small incision in the chest, or an artery under your armpit, or the carotid artery through your neck. Some patients have problems with their leg arteries, or if you're a smaller person and the size of the vessels isn't large enough, there are alternative strategies. But nowadays with the smaller size of valves we're able to get through the groin in the majority of people.

"Aortic stenosis is very prevalent. It's something that happens to all of us as we age. Symptoms of aortic stenosis are feelings of chest pain, shortness of breath or passing out. Once these develop, if you don't treat the problem, there's a 50 percent mortality rate at two years."

TAVR is a same-day procedure. Patients are sitting up in a chair and are generally walking around the next day. Depending on their condition, the hospital stay can range from three to five days.

"When the surgery goes well," Bakir says, "a patient can come and have the surgery in one day, have the valve replaced, and literally walk out of the hospital two days later with band-aids on their legs."

But TAVR is not for everyone. It's currently used for patients who are classified as high-risk or intermediate prospects for open-heart surgery because of age. Other factors are poor heart function, problems with lungs or kidneys, or if the patient has had prior heart surgery.

For low-risk patients, Ronson says, "the durability of a standard operation is still recommended, but there are trials underway to see if the new procedure can be done for everybody. It's important to emphasize the fact that these TAVR valves are already in their third generation and the learning curve has flattened out. Now the procedures are widely accepted, not investigational or experimental, and they're a very viable option for a lot of patients."

Collaboration is a central factor in TAVR and the program's success, Bakir says. "Our team at Brookwood includes myself, Dr. Russ Ronson, Dr. Chris Huff, Dr. Luiz Pinheiro, and Dr. Edwin Kezar. Our patients who have TAVR usually have additional significant health problems. By definition, we're doing these procedures on those who aren't able to have a traditional surgery. One of my favorite parts of this program is working with a team to help patients who previously had few options for intervention. I'm excited about the program and its future."