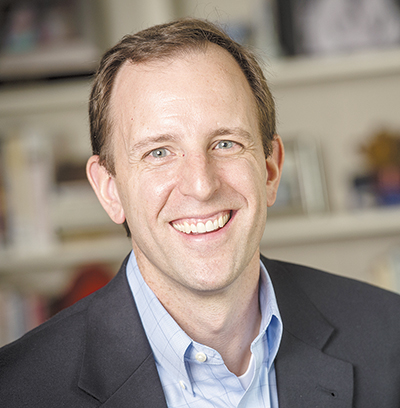 An icon of Southern literature, William Faulkner illustrated the genius of writing based on your own experiences. Stephen Russell, MD, associate professor of internal medicine and pediatrics at UAB, has embraced that ideology in three fictional works, the most recent released in March. Control Group, the third in a series of novels headlining the character Dr. Cooper "Mackie" McKay, is a thriller set in the world of medicine and was released as both audio book and in print. The doctor and author didn't try his hand at fiction until after his formal medical training.

"After I completed my residency, I had a little bit of time," Russell said. "I accumulated lots of stories from patient experiences, and I decided it was a great time to put my ideas on paper and see what I could make of them."

As he was writing his first works, Russell was in the throes of a formative time. Working in intensive care prompted him to begin journaling his experiences. Soon after, the young physician found himself fashioning short stories with characters representing patients.

"I was leaving the comfort of the classroom and being put in situations to help make medical decisions at a critical moment in people's lives," Russell said. "At that time, you don't have enough life experience to put that into context. It's an opportunity to think of what this illness means for patients, but also, 'What does it mean to me as I navigate this?'"

It was Labor Day weekend 2004 during a visit with his in-laws that the idea for Russell's first novel came to him.

"I had just completed one aspect of my training and was doing a lot more reading in the summer than in a school year," Russell recalled. "I'd finished some novels that were good, but not great. I wondered whether I could do something similar."

Reading fairly mediocre works was the first step. The second was recalling Faulkner's counsel to write what you know. Russell had recently become board certified in pediatrics and decided his stories would involve the medical sphere.

His first novel zeroed in on at a synthetic blood substitute and the problems emerging from corporations attempting to exploit the product, which was fiction based on a kernel of truth. His most recent work, Control Group, explores the possibilities of Big Pharma altering electronic medical records with profits as the ultimate goal.

"Electronic medical records are the backbone of what physicians do daily," Russell said. "I take some of the ideas based on real world experience and twist them in such a way I can make a good story."

Like his most recent work, Russell's first novels, Blood Money and Command and Control, represented years of work and hours of writing. But his methodology is also based on hours of reading and studying writing styles.

"One of my early medical mentors was Michael Crichton, a physician first and a writer second," Russell said, adding he was recently influenced by Cutting for Stone authored by Abraham Verghese, whose story-telling was an inspiration.

"I wanted to write, not just plot-driven stories, but stories that were well-told," Russell said. "That was an objective I had in mind as I was putting pen to paper. Whether I managed that is something for the reader to decide."

Russell has developed patterns as an author and likes to set aside structured time for his work, waking up at 4:30 a.m. to write each day for four months.

"I have seasons of writing, and the morning hours are best when I'm in the midst of creating," Russell said. "It's effective and helpful to get them out in one continuous session."

When the dedicated writing time ends, he sets aside the book for work and for family and says time spent reading such books as the Harry Potter series with his four kids helped in creating his audio book. He voices each character differently as he reads to enliven the written word.

"Though the audio process of making a book is more sophisticated than telling bedtime stories, that experience helped," Russell said.

Reading his work aloud added another facet to the creative process. Though he hasn't begun a season of writing for a follow-up novel, he confesses to having outlined about 10 pages for a fourth page-turner featuring the surgeon, McKay. His novel is available on Amazon, and the ebook can be purchased through iTunes and Amazon.