UAB first in Alabama to Use FDA-Approved PFO Occluder 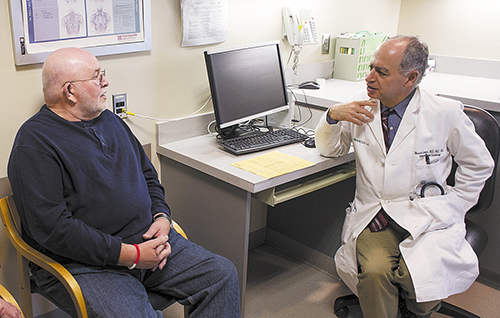 Around one-fourth of all American adults have a patent foramen ovale (PFO). Although present in all humans at birth, this small flap-like opening -- the foramen ovale -- in the wall between the right and left upper chambers of the heart, usually closes during infancy.

Normally, a PFO creates no health problems in adults. In some, it can cause cryptogenic strokes. "There is no data on the subset of those who have strokes with PFO, but we do know that they have strokes and we cannot find any other reason -- no blockage and the heart is perfect, but they have PFO," says Massoud Leesar, MD, UAB professor of medicine and section head of interventional cardiology. "In these patients, it is indicated to close that PFO."

The strokes occur because a blood clot, such as in a leg, migrates to the heart, travels through the PFO from the left to the right side of the heart and then on to the brain, where it causes a stroke.

"Stroke in patients younger than 60 years old is probably related to PFO," Leesar says. Patients older than 60, should have more common causes ruled out, such as atherosclerosis and atrial fibrillation.

The treatment for those suffering strokes from PFO has commonly been a blood thinner. Another option was to insert a device called an occluder to plug the hole. Leesar has performed over 100 of these procedures in the last 10 years. "But there was no guidelines or FDA approval," he says.

That was because studies on the occluder had produced mixed results. However, those trials had included PFO patients who had never had a stroke. "But the RESPECT study fixed that," Leesar says, and the results changed everything.

Published last November, the RESPECT study (Randomized Evaluation of Recurrent Stroke Comparing PFO Closure to Established Current Standard of Care Treatment), showed a strong advantage for implanting an Amplatzer PFO Occluder in PFO patients who had experienced strokes. "That approved the device," Leesar says. "It's the first time a study clearly showed that patients who had prior strokes benefited from this device."

In January, UAB was the first in Alabama to use the newly FDA-approved occluder. "Our first patient did very well and was discharged the day after the procedure, since the echocardiogram showed complete closure of PFO," Leesar says.

When open, the occluder resembles a double-decker, woven-mesh disk. When travelling through the vein, it looks like a closed umbrella. In the heart, the smaller disk inserts through the hole and unfurls flat. The bigger disk remains on the other side of the hole, completing the closure. The pressure of the from both sides keeps the disks in place.

"It gradually gets covered by cells, and stays there forever," Leesar says. Like stents, the occluder is composed of metal nitinol resulting in zero antigen effects. During the three months it takes the cells to cover the device, the patient takes Plavix to thin the blood. After that, patients take a daily aspirin to keep the blood thin in case some area may not be completely covered.

Complications can occur in the deployment. "It can cause stroke if not done perfectly, because air bubbles can go to the brain or, rarely, a device can fracture or, very rarely, a device can move and separate from hole," Leesar says. But the only bad experience Leesar has heard of with the device was due to a nickel allergy in the patient. "There's a mixture of nickel in nitinol," he says.

This device is not new; nor is the procedure. "But now we have guidelines and a defined group of patients who will benefit most," Leesar says. "And the occluder should be used. Deploying the device is a very reasonable approach to preventing future events." He expects that with the new FDA approval, UAB will soon be performing the PFO occluder procedure two to three times a month.