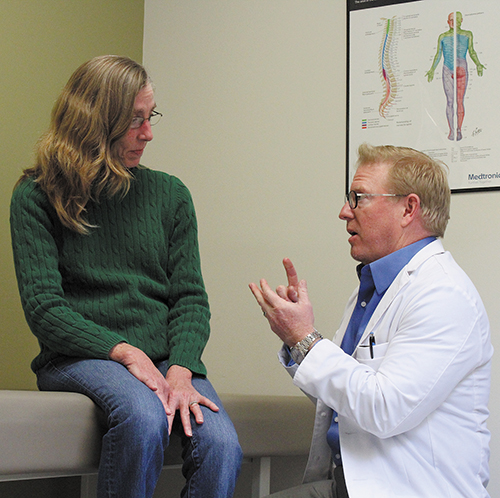 Ty Thomas, MD, of Alabama Pain Physicians talks with a patient about low back pain.

A novel drug, Probuphine, was approved last year by the FDA as the first and only buprenorphine implant to treat opioid dependence. Probuphine implants, placed in the arm, give up to six months of continuous release of a low-dose buprenorphine that helps prevent withdrawal symptoms and cravings. The same pharmaceutical company that brought this drug to market is working on a buprenorphine-based injectable for moderate to severe chronic low back pain.

In 2001, the Joint Commission rolled out its Pain Management Standards, which helped grow the idea of pain as a fifth vital sign. Given the perception at the time that pain was undertreated, the standards required healthcare providers to ask every patient about their pain. Since that time, the U.S. has experienced a surge in opioid prescriptions and, subsequently, an increase in overdoses and deaths tied to opiate pain killers.

"I began to see the consequences of these standards when I started my pain practice in 2009," Thomas says. "Many patients were given opiates to treat pain without adequate education. I see this manifest clinically when patients describe a history of needing more pain medication to control their pain. I believe patients often confuse euphoria for pain relief, especially if expectations were never defined when starting opiate therapy. It is not surprising to see this evolve into a crisis when so many patients have become dependent on opiates."

Thomas uses buprenorphine for his patients, because it does a good job of removing euphoria. "We have been using it for addiction for many years. Recently, it was approved for pain in low doses," he says. "I like this molecule for pain, because it acts at the mu opioid receptor and provides analgesia. At the same time, it has a ceiling effect which makes it relatively safe.

Traditional opiates lack a ceiling effect which means more of the drug produces more results. If that result of pain relief is confused for more euphoria, more opiate is required to achieve a similar benefit. However, the side effect of traditional opiates is respiratory depression. This is what happens in many accidental overdoses, resulting in death."

Thomas prescribes buprenorphine for both dependence and pain. "I have seen great results in patients who are taking very high doses of opiates. For these patients, it is necessary to get them off opiates to determine what is going on so we can begin to figure out where the pain originates. Buprenorphine has been a good tool for this. Most of the time, the patient hurts less, thinks more clearly, and functions better," he says.

Thomas would like to see buprenorphine used more for moderate to severe pain. "I think we are seeing this happen with products like Butrans and Bellbuca. I like the idea of implanting long-acting forms of medication for disease states like chronic pain. The benefits of improved compliance, safety, and convenience are great," he says. "The reduction or elimination of oral and/or fast-acting opiates can only help reduce the reinforcements associated with a cycle of addiction. I think it is a great idea, and I think we need more options like buprenorphine available."

The FDA has announced an action plan to help reverse the opiate trend. The plan takes a detailed look at the benefits and risks of using opiates in non-malignant chronic pain. Buprenorphine has benefit while reducing risk.

"I think we will see more pharmaceutical companies get in this arena. We already see how the changes made by the Alabama State Medical Board regarding opiate prescribing have affected practice patterns," Thomas says. "Two to three years ago, it was common for patients to come to our clinic taking more than 120 mg morphine equivalents daily. Now, we rarely see those amounts prescribed in the community. I think we are on the right track in addressing the opiate epidemic. Legislation and policy changes, combined with safer medications, can help significantly."

Alabama Pain Physicians is participating in a Phase III, double-blind, placebo-controlled, multicenter study to evaluate the efficacy and safety of a long-acting buprenorphine injectable product. To qualify for the study, participants must have chronic back pain and be prescribed at least 60-80 mg of morphine equivalents daily. Participants will be reimbursed for their time and travel.