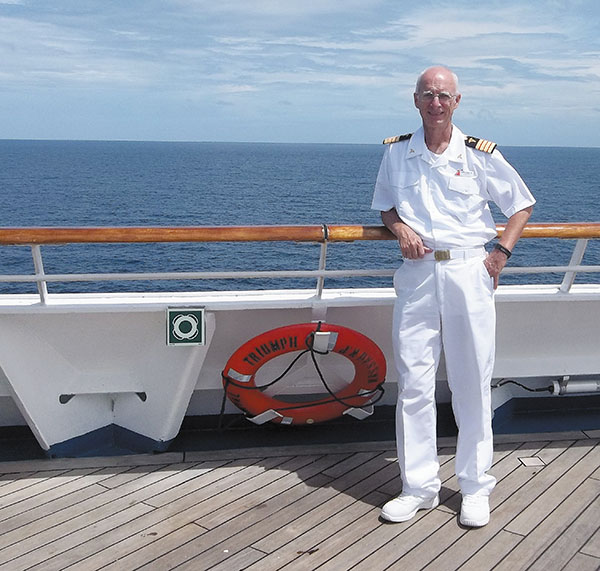 As spring settles in Alabama amid dogwoods and azaleas, locum tenens physician Robert Cosby, MD is enjoying the balmy Caribbean as part of a unique fraternity of maritime medicine. This April, Cosby is traveling to various ports of call, including the Virgin Islands, Puerto Rico, and Belize. He is serving as an officer for Carnival cruises, something he does periodically to keep things lively.

Cosby refers to himself as an itinerant worker, a term that seems counterintuitive in reference to an MD, but there is some truth to his description. The longtime medical professional is an ER doctor at times, a cruise ship officer at times, an Army medical specialist, and he has even spent a stint as a circus physician. It's a nomadic lifestyle in keeping with the Latin "locum tenens," meaning "to substitute for."

Cosby finds filling in where help is needed both stimulating and interesting. "One of the factors that attracted me to medicine was the flexibility," he said. "I realized early on that with a medical doctorate degree, you could work just about anywhere. I have used that over the years by the grace of God to travel and work."

Cosby first encountered the idea of maritime medicine at a conference in Seattle. He attended a session organized by a doctor who located physicians for locum tenens positions on Hawaii cruise ships.

"At that time, my practice in Tarrant city, but I had also joined the National Guard and had drills on weekends," Cosby said.

Still, he managed to find time to pursue this intriguing path. Cosby has since worked for three different cruise lines, first with American Hawaii intercostal cruises, trekking from port to port and circling back to Honolulu. His second voyage was even more of an adventure, as he flew to Newport News, Va. to board a ship that was being refurbished in transit to Hawaii via the Panama Canal.

During his time at sea, Cosby has learned that in close quarters, a simple virus becomes disastrous.

"Because a ship is a closed environment, we try to be careful to screen people who come on board," Cosby said. "If they have a fever or diarrhea, we recommend they not get on, or they have to be quarantined. As the ship's physician, I have to be very concerned with the guests, passengers, and crew catching the virus."

When the ship is at sea, anything can happen. One 20-something passenger embarked on five-day cruise, despite her renal failure and dependence on dialysis. She had hoped having dialysis the day before leaving would allow her to stretch until the cruise ended, but instead was severely ill and had to be intubated and sedated.

With the boat still 190 miles away from Galveston, Texas, Cosby worked with the crew to coordinate a rescue helicopter intercept, requiring hours of work to remove lines and superstructure to open the space for the helicopter to hover and disembark the critical patient.

"Two paramedics rappelled to the deck with a basket to pick up the patient," Cosby said. "We had to call out a fire team because if the helicopter crashed on deck, we would have had a massive fire. Paramedics were hanging off the side of the basket at midnight to get the patient to safety."

Cruise doctors have to be prepared for everything from jelly fish stings to medications left behind to viruses and critical illnesses. It's the ship doctors' job to officially release the boat before it is allowed to leave port by messaging the captain that all is well.

"One man had a heart attack walking up the gangway after a day trip ashore, and we had to call an ambulance from a foreign port," Cosby said. "There are specific protocols to follow with the port master and ship liaison to hold a ship."

Cosby says while laws in the U.S. prohibit withholding care when patient is in serious distress, that doesn't apply at some of the ports of call. It's the duty of the ship physician to determine if the quality of care is more hazardous in the available medical facility at port or whether the passenger should remain on board for assured care.

One person aboard a ship came to Cosby with a stomachache that he later learned was pain related to metastatic cancer.

"A lot of people come on a ship as a last hurrah," Cosby said. "They want to entertain their family and celebrate near the end of life. What can you do for someone with metastatic cancer in the middle of the ocean?

"The average age of guests is 70 years. That means you have a lot of seriously ill people. You wonder if they are making good decisions about coming on board a ship."

All officers are required to complete courses in Crowd Management, Crisis Management and Human Behavior, and Advanced Shipboard Environmental Training.

"Crew come from 50 different countries and, of course, speaks many languages, although English is required for all," Cosby said. "There is a wide range of English proficiency, however, often making medical life difficult. Sometimes interpreters are necessary to take care of guests or crew."

Cosby also has intensive training as a ship's officer, including studying and learning the ship's method of tracking the flow of garbage, as well as lifeboat drills and even sanitation courses. Some doctors will travel for six to nine months at a time, but Cosby prefers two or three weeks.

"It's a flavor of the exotic to travel like this," Cosby said. "If you target what you really want to do and focus and work hard to get that, you can have some interesting experiences."